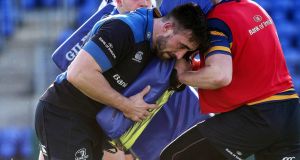 Jack Conan in training earlier this week: player is among the eight changes within the squad that Leo Cullen has made for the Cardiff Blues game. Photograph: Donall Farmer/Inpho

The misfortune suffered by Mike McCarthy that has prematurely ended his season and depleted secondrow resources at the province adds a slightly greater resonance to the belated debut of 24-year-old Clontarf native Mick Kearney for Leinster.

He joined from Connacht (68 appearances) during the summer but a twice broken toe has kept him sidelined to this point. It is a timely fillip for both player and club as Leinster enters the business end of the league season proper.

Another swapping the treatment table for the pitch is number eight Jack Conan as Leo Cullen made eight changes to the side that thrashed Zebre 52-0. Cian Healy will amass more game time ahead of potential Ireland commitments next weekend while Mike Ross, another who could be heading for London, is named among the replacements.

To put that defeat in context, it represented Treviso’s first win in almost a year, when coincidentally they beat the Blues on that occasion. Leinster should relish the prospect of playing on the artificial Arms Park pitch, a fast surface that should suit their style.

Cardiff have beaten Leinster just once in 18 meetings, a sequence that the Irish province will be looking to extend. This is a match that Leinster simply must win to continue their pursuit of their provincial rivals, albeit against a Blues side that have won their last five matches at today’s venue.

The visitors will look to halfbacks Eoin Reddan and Ian Madigan to manage the game intelligently and given a reasonable platform possess the wherewithal in the three quarter line to capitalise on those opportunities.