Leinster grind their way past Connacht at a sodden RDS 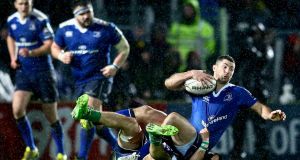 Rob Kearney is tackled by Tiernan O’Halloran during Leinster’s 13-0 win at a sodden RDS on Friday. Photograph: Inpho

Leave this as a solid win in atrocious conditions. The relentless wind and sideways downpour demanded a specific approach so the Leinster pack - sans Jamie Heaslip and for a time Sean O’Brien - slavishly adhered to the basic principles of winning a game of rugby.

The contest, after an hour, was decided by a mildly controversial Josh van der Flier try. When the flanker forced himself under a heap of bodies, referee George Clancy only sought to be given a reason not to award the five points.

TMO Marshall Kilgore could’t find any. Change the question and it would have been a five metre scrum but, at that juncture, Leinster seemed certain to score.

“It was definitely a try in my eyes,” Leo Cullen could smile afterwards.

They could have gone wide to Garry Ringrose and Fergus McFadden but the forwards disagreed.

“You know they are going to come aggressive off the try and it places a helluva a lot of pressure if they get a turnover and suddenly you are 70, 80 metres down field.

“We still tried to play in the second half with Garry making a bust on the inside and Rob and Dave on the outside. We did some good things but it is difficult, a lot of one pass plays. Grinding out yards. Trying to win collisions.

“It wasn’t pretty at times but I thought we managed it well.”

The usual Connacht season has a habit of running into trouble around this time. Not that this is a usual season for them. But still, Ulster and now Leinster have dented their previously magnificent start to the Pro 12.

The evolution of Connacht as a ball playing side since the arrival of Andre Bell and skills coach Dave Ellis was obvious even on this messy evening. A swirling wet gale demanded the snappiest of fingers but the western visitors, when forced to carry out of defence, which was for most of the first half (they won the toss), had the good sense to rapidly shift possession to the third receiver. When John Muldoon was doing it you could see the coaching.

Not that we were watching a rugby feast on this terribly exposed New Year’s Day. At least there was occasionally interesting viewing, a test of patience as Connacht’s swarming, mostly offside, defensive line cleverly denied Leinster the early score they craved.

They held on for an hour with some perfect turnovers by Eoghan Masterson and excellent openside Jake Heenan (Irish qualified in September but more importantly finally playing again) to march into Leinster’s 22 for the first time on 33 minutes. Alas, Tom McCartney, another astute New Zealand recruit, over threw the lineout to Muldoon.

Richardt Strauss pounced and Johnny Sexton cleared. Sexton was eventually removed due to a knee injury.

But the attempted snatch and grab raid was not over as yet another fumble by a blue jersey saw Niyi Adeolokun in a sprint for the loose ball with Dave Kearney. It was the same corner that Kearney had that nightmare spill to gift Wasps winger Christian Wade a try in November.

Kearney repeated the error and when older brother Rob was also fooled by the slick surface Adeolokun had two metres to travel for the try.

Connacht arguably deserved a half-time lead such was their defensive resilience, especially the fracturing of the Leinster maul. Again, that’s coaching.

The opening 13 minutes of play were exclusively devoted to Leinster ignoring shots at goal as they sought to walk over the smaller Connacht pack. Sexton eventually had enough and took the simple three points on offer.

And what, you may wonder, of the continued rise of Ringrose? He showed that naturally evasive ability of his on 17 minutes when gliding inside the first tackler, Kieran Marmion, before it required two bodies to haul him down.

Another break came later but the most notable contributions were from the heavies with Mike McCarthy in particularly impressive form, drawing a high shoulder from Nathan White and obliterating Jack Carty in open play.

The young Connacht outhalf would kick the next time he faced the rush defence.

But Ringrose looked the best chance of a creating Leinster try. As the second half rustled to life Eoin Reddan popped to Jordi Murphy and looped for the return but Murphy, relishing his chance at number eight, passed the way he was looking. Ringrose galloped into the 22 but the attack died on the grass.

Both Sean O’Briens arrived, the more established earning his 100th Leinster cap in place of Murphy, just to harden up the theme of forwards pounding into each other.

Van der Flier proved the value of such play when squeezing under a gaggle of Connacht jerseys on the hour mark. It came from Dave Kearney’s charge off his wing and into the Connacht 22. There was also an argument for Reddan to interrupt the pick and drives to shift possession out to Ringrose.

But there proved no need.

That should have been it really. The 14,297 crowd (official number includes season ticket holders) politely remained largely in place despite the incessant rain to see Connacht hard done by.

Rob Kearney clearly touched the ball forward just inches from his own try line. The officials missed it.

Connacht kept the pressure up but van der Flier earned himself a congratulatory belt from O’Brien for a cracking steal on the ground.

Jack McGrath also got a slap from the old man for his troubles.

Ian Madigan, in for the roughed up Sexton, directed Leinster out of their own territory.

Ken Early: Despite coronavirus, Premier League season must be finished if at all possible 06:00
Summer tours next in line for postponement as rugby assesses options 05:00
Favourite sporting moment? It’s a bit like choosing your favourite child . . . 01:00
My favourite sporting moment: When Zidane glided through Brazil in 2006 01:00
Angling Notes: Many fisheries have closed for the foreseeable future 00:00
Here is your handy guide to sport on television this week