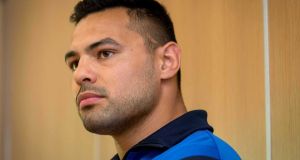 Ben Te’o has adjusted well in his switch to Rugby Union this season. Photo: Ryan Byrne/Inpho

Ben Te’o smiles when he’s asked to evaluate his first season at Leinster, a kaleidoscope of emotion that broached extremes, from breaking his arm in his first competitive game, to the pomp and circumstance of the Champions Cup semi-final defeat to the eventual winners, Toulon at the Stade Velodrome. And all points in between.

The 28-year-old’s acclimatisation process required a not only a cultural adjustment in shifting from one hemisphere to another but straddling a return to the rugby union code of his teenage years from the heady heights of an Australian National Rugby League Grand Final victory with the South Sydney Rabbitohs. He’s had to change country, sport, position to some degree, and several time zones.

Despite breaking his forearm in his first match for the province at the end of October and being sidelined until early January, there has been an appreciable progression in the consistent quality of his contributions in the blue of Leinster.

Prior to Saturday’s final Guinness Pro12 League game of the season, the Auckland born centre has racked up 13 appearances, scoring four tries in the last seven matches. He’s achieved this in a club that’s struggled for form in the league, rhythm in performance and with a constantly changing supporting cast, coping admirably.

Te’o admitted: “It’s been a bit of a rollercoaster for me, getting here, breaking my arm, working my way back (when) really what I needed was game time. I lucky enough to play in some big games, Bath and Toulon; I suppose it’s (the season) all fallen apart towards the end.

“It’s been a big move and I’m happy with how I’ve adjusted so far. I’ve a lot to work on but I’ve realised that changing habits at an older age is quite tough as well.”

He elaborated on the technical issues. “Defensively, how my tackle technique has been honed over the years, changing it to rugby (union), in terms of chopping lower and that sort of stuff: running the ball, presenting the ball, those are things that just need a bit more time. I’ve just been learning a lot all the time, something new.

“Yeah, I’ve proved to myself that I could excel at professional rugby and that was always going to be a big challenge. I’ve come a long way, but what I can do with a break and a really, really good pre-season, get in tune with my body and skill-set, come back and next year is when I can prove what I can really do.”

He’s diplomatic when discussing the difficulty of finding his feet in a team that struggled for league form and also the significant turnover in personnel from game to game. “I’ve found the way things are set up here it’s quite different.

“I came into the team and then you’ve guys disappearing for Six Nations (where) they went very well. Then you’ve got guys coming back with bumps and bruises. Pro12, you’re resting guys, ‘he can’t play because he’s played too much’ or ‘he’s injured’. It’s always the team chopping and changing.

“It’s very different to where I’m from, you stay with the team. There might be some injuries or a bit of form, but that’s your team. Here, sometimes we go from one forward pack to a whole new one. I found that interesting, but that’s just rugby and you have to juggle these players and their loads. It’s been very different in that case.

“Since I broke my arm and then got back, I’ve played every game. I’ve pretty much played 80 minutes every week, even when there’s been a week off, I’ve played with the ‘A’s. I’m just playing and training and doing all the sessions, because I need to. There are other guys who need to be looked after a bit more.

“Yeah, once you’ve played some games you know yourself and you think ‘this is where I can really find some improvement in the off-season”. I can change my body a bit; really work on aspects to my game. I have probably been identifying a lot of things and I definitely want to go away and work on them.”

He’s got enough to be getting on with so the question of whether he’d like to play international rugby is an abstract question for now but he did admit: “If I’m good enough I would love to play. Everyone wants to play in the big games and the international scene is the biggest spectacle in rugby. Yeah, you’d love to do it. If someone thinks you’re good enough to do it, yeah, why not?”

There’s plenty to occupy him in the short term, starting on Saturday.