Peter O’Mahony: We will need our best performance yet 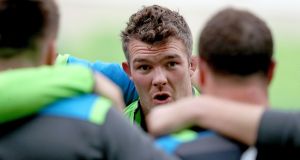 Amongst the many emotional elements a beaten team brings a week after a defeat is an anger to rectify what went wrong a week beforehand. Although Peter O’Mahony didn’t use the word, the Irish captain suggested as much after conceding they fell below the standards they’d set in winning the Grand Slam, but that it will have to be channelled into their best performance of the season if Ireland are to beat Australia and level the series.

That 18-9 first test defeat a week ago in Brisbane ended a 12-match winning run stretching back 15 months, and on the eve of Ireland’s second test against Australia in Melbourne’s AAMI Park on Saturday (kick-off 9.05pm local time/11.05am Irish) O’Mahony admitted: “Fellas are frustrated and upset, it was a record we wanted to hold on to.

“But we’re a team that understands that when something like that happens we have got to improve. It was up to us to have a good look at the game and see what areas we need to improve on.

“We understand that we were beaten by a better team last Saturday and we’re going to have to put in a performance that has been better than any we’ve put in over the last 18 months to beat this Australia team. With the quality they have and their game-plan, they’re one of the best teams in the world and we have to up our game from the standards we set in the Six Nations, which we certainly didn’t do last week.”

This, more than not finishing a memorable season on a low note, is what has been driving the squad this week according to the captain.

“It’s for us, more than anything, it’s not that we’re saying we want to finish the season with this or that. We want to better our performance every week and that’s what we’ve been focusing on.

“We knew our performance wasn’t up to scratch last week, we’d a good look at the areas we need to improve on and there was quite a few, which hasn’t happened us in a while. But we’ve taken those learnings, tried to work on them during the week and hopefully that pays off on the weekend.”

The Wallabies, by contrast, are seeking to back up a win, although having had experience of a long winning run, O’Mahony doesn’t necessarily believe that Australia have the harder task.

“There’s two sides to the coin, the confidence that they’ve got from beating the All Blacks and the performance last week are things that give you confidence in your ability. Not that they need it, they’re a superb team, but you build on your wins. You take the good with the bad and try to get better.

“That’s what we’ve tried to do, that’s what we have to do this week - be better than last week. It won’t be different for them, they’ve a hunger to get better and we’ve no doubt they will be better.”

Whereas Ireland have made eight changes, the Wallabies are unchanged for the first time under Michael Cheika’s but O’Mahony doesn’t believe this makes it easier to analyse them.

“You’re still dealing with one of the best squads in the world. All the names jump off the page, as much work as you do you still have to try and negate them in the 80 minutes which is the difficult thing. I don’t think it makes a difference.”

One of those changes sees the return of Dan Leavy, whom O’Mahony played alongside in all of Ireland’s five wins in the Six Nations, and who is sure to bring his typically high work-rate and impact on both sides of the ball.

“He’s had a great season and he’s brought a great energy. He’s been incredible at playing rugby this year. He’s brought a physical edge, his fitness, his enthusiasm to get stuck in is infectious and it’s good to have him back in training this week. I’m sure he’s raring to go.”

Invariably, the Irish captain was asked about Neil Francis describing David Pocock as a cancer on the game. “I don’t read a huge amount of media stuff and I don’t read a huge amount of Neil Francis’ stuff,” said O;’Mahony, “but I certainly don’t think that that’s the opinion that we, as a group or as a nation, have of David. He is an incredible rugby player, we saw that with the impact he had on the game last week, and I certainly wouldn’t be standing by an opinion like that.”

As for negating, or even limiting, Pocock’s peerless ability over the ball, O’Mahony admitted: “It’s a very difficult thing to do, he’s a quality rugby player and been proving that for a long time. Look, it’s an individual battle that we have at the breakdown. He’s there and whoever’s there at the breakdown, you’ve got to be there earlier and negate them, which is a difficult thing to do. You saw the impact he had last week so it’s something we have to try to stop.”