Patient Porter pushing for that number one spot 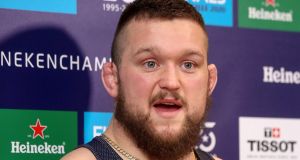 Andrew Porter: “This is my club. This is my home, and it’s great to be pushing for that number one spot.” Photograph: James Crombie/Inpho

In his cut-off vest the Tats are blazing. There’s a smile on his face. Andrew Porter gives the impression he has found a place in his game that is comfortable with his spirit. A try last time out against Lyon in the company of Josh van der Flier, Max Deegan, Sean Cronin and a Dave Kearney couple. That can do it.

But casting a colder eye he should probably be one of the more brooding of the players who walk through the door. Why? The door stop. Tadhg Furlong.

But patient Porter is a plotter. The tattoos that cover much of his arms and leg are not a narrative of impulsive, storied nights out. They are not laid down to mark the passing of time, the first try, the first cap or today his 24th birthday.

“I plan them out way in advance. They’re an expression of character,” he says of the ink. “I think them through more than anything. Over a few years I think them through. It’s not just made overnight, it’s not a decision made lightly.”

That might also apply to his transitional game last summer in which he played for 70 minutes against Italy, one half at tighthead, the position of all his previous professional rugby, the second at loosehead and memories of the Ireland U-20s.

John Fogarty, recently appointed as the Ireland’s forwards coach, encouraged him to make the switch. The two recently met up again in the new Irish base in Sports Campus Ireland.

“I think it’s good because he knows what I’m like and I know what he’s like. It’s definitely good to be with someone you’re familiar with,” says Porter.

“I think a change of personnel, it freshens things up. We have Mike Catt and like I said it’s about new perspectives, looking at the game differently. He can bring fresh new ideas. It’s great for something like that to happen for the squad.”

Porter and Furlong are friends. But Porter didn’t start in any of the matches in the World Cup. The pecking order was rigid. He is reluctant to speculate on whether the gap between them has closed. The smile, the openness, quietly maybe he does.

“I wouldn’t really know that,” he says sidestepping. “We’re very still tight together. He gives me a few tips. It’s one of the best things you can have, one of the best tightheads in the world giving you tips.”

He has 23 Irish caps and understands how brutally quick the landscape changes. Jack McGrath, a British and Irish Lion loosehead, was off Joe Schmidt’s radar for the World Cup. Don’t blink is the message.

Porter and Andy Farrell have not yet sat down. The prop expects that will soon take place as he was also named in the squad on Wednesday.

It is what Leinster have cultured and what Farrell will want to do with Ireland. The psychology is not to unsettle players by framing their selection as always under threat but by creating an environment of equals with differing form and qualities.

“This is my club,” he says.”This is my home, and it’s great to be pushing for that number one spot.”

Patient Porter. But not too patient.

Dave Hannigan: Everyone believed they were on first name terms with Kobe Bryant 21:00
Holders UCC see off UCD to book spot in Fitzgibbon Cup semi-finals 20:38
Women’s hockey tour of South Africa ends with loss to Germany 19:49
Tiger Roll on course to bid for Grand National history 18:46
Sizing John to miss rest of season after suffering another injury 18:19
Here is your handy guide to sport on television this week