Out of Bounds: Rory says he didn’t need to win, but he did 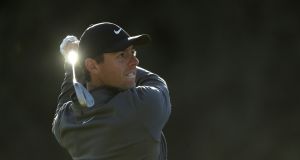 Rory McIlroy during a practise round for the WGC Dell Technologies Matchplay at Austin Country Club in Texas. Photograph: Richard Heathcote/Getty Images

It was back in January, ahead of resuming his tournament schedule after a winter hiatus to allow his body recuperate, that Rory McIlroy suggested a win wasn’t imperative before he got to the Masters tournament at Augusta.

He was speaking before the Abu Dhabi HSBC Championship. “I don’t need to win, but I’d love to,” said McIlroy. The tournament in the emirate was the first of his comeback, the first of eight in the most intense build-up to the Masters where he will seek to complete the career Grand Slam.

And, he was right, he didn’t “need” to win before getting to Augusta National.

Now, he has. And, in a richly ironic sort of way, it was the late, legendary Arnold Palmer - whose signature red cardigan has been added to McIlroy’s wardrobe - who once remarked, “Winning isn’t everything, but wanting it is.”

And there can be little doubt that McIlroy’s hunger for winning, and especially when it comes to completing that missing piece of the Grand Slam jigsaw, is every bit as strong as Palmer’s in his day.

McIlroy’s win in the Arnold Palmer Invitational tournament - and more so the manner of it - will give the Northern Irishman a better chance of actually getting his hands on a green jacket, because recent history provides a strong evidence base that likely champions in Augusta have already experienced that winning feeling before making that drive down Magnolia Lane.

The 2015 champion? Jordan Spieth got his winning feeling at the Valspar Championship in the build-up to Augusta.

And the 2014 champion Bubba Watson was a winner on tour at the Northern Trust Open, prior to winning his second green jacket.

Okay. Okay. Adam Scott hadn’t won in the 2013 season before defeating Angel Cabrera in a play-off to claim his breakthrough Major title . . . but there is a greater weight attached to winning a tournament in the run-up to the season’s first Major and, with just over two weeks to go, McIlroy’s victory in the Arnold Palmer Invitational couldn’t really have been timed any better.

As of now, McIlroy is the only Irish player eligible to play in the Masters which, in itself, is quite a sea change.

The only way for, say, Shane Lowry, Graeme McDowell or Pádraig Harrington to gatecrash the party would be to win the Shell Houston Open, the final tournament before the Masters. It really will be a case of the last chance saloon next week for those aiming to join McIlroy.