Spain calls for Belgium replay as they lodge formal complaint 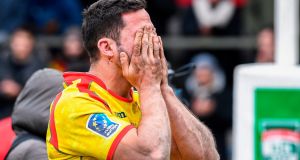 The Spanish Rugby Federation has lodged a formal complaint to World Rugby and Rugby Europe, demanding that their game against Belgium which ended in a controversial defeat on Sunday should be replayed.

Spanish officials were left fuming over the performance of Romanian referee Vlad Iordachescu in the 18-10 defeat by Belgium which allowed Romania to qualify for the World Cup at Spain’s expense.

Victory over Belgium would have secured Spain second place behind already-qualified Georgia in the Rugby Europe Championship standings and a ticket to next year’s World Cup in Japan.

“The Spanish Rugby Federation presented this Tuesday a formal complaint to World Rugby and Rugby Europe over the events that took place during Spain’s game with Belgium on March 18th,” the Spanish body said in a statement.

“The Federation trusts that World Rugby will allow the game to be replayed, given that the image of rugby is being damaged by this game.”

Spain can still qualify but face an arduous series of playoff games if they are to get through to the game’s showpiece tournament for the first time since 1999.

World Rugby said on Monday it was trying to “understand the context of events” following the issues raised by Spain but made clear it would not interfere in the appointment of officials made by Rugby Europe.

Rugby Europe said the game would be discussed at the next meeting of the oganisation’s selection committee.

“Rugby Europe Selection Committee is waiting for the assessment report of the supervisor for Belgium v Spain match officials,” it said in a statement.

“This committee will meet in Poznan next Friday . . . and a large portion of the meeting will be devoted to the analysis of every stage of the Belgium v Spain game. Following this meeting, a statement will be released to Rugby Europe board of directors for dissemination.”