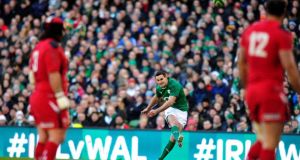 Jonathan Sexton kicks a penalty during Ireland’s Six Nations victory over Wales at the Aviva on Saturday. The outhalf pointed out some key moments that were central to the result going in Ireland’s favour. Photograph: Aidan Crawley/EPA

The question hadn’t been framed in its entirety but Jonathan Sexton alighted on the phrases “Munster coaching vacancy” and “Ronan O’Gara might come home”, demonstrating his eye for a gap, by smoothly interjecting with the observation, “I’m going to go with him”. Laughter perforated the punch-line.

Sexton cut a relaxed if slightly cold figure after a photo shoot for his new role as a brand ambassador for Aer Lingus, his raspy voice, a legacy of an illness that surfaced the night before the Welsh game.

O’Gara has verbally put plenty of distance between his desire to coach Munster some day and the vacancy that will arise when Rob Penney departs at season’s end.

Smiled mischievously
Sexton, though, smiles mischievously when asked whether O’Gara had spoken to him on the topic, suggesting he could really stir things up before offering a less salacious view.

“From my point of view, I hope he is in Paris next year. But I know from speaking to him that he would love to coach Munster at some point. That would be his ideal job. That is why he is becoming a coach.”

Saturday’s 26-3 victory over Wales leaves Ireland in rude health as they prepare for England at Twickenham on Saturday week but Sexton offers a counterpoint to the notion Ireland have cruised through the first fortnight of the tournament, specifically addressing any misconceptions about the nature of the Welsh win.

“There was one stage when they were on our line and gave up a soft penalty for a double movement. That was a big point in the game. If they score a try under our posts, that seven points [it was 19-3 at the time]; then it is a different game. That was very important to repel them there.”

He argues Chris Henry’s try just before half-time was crucial as without it Ireland would have turned to play against the breeze with just a six-point lead.

“When you get to 13 [points ahead] they have to chase it a bit more and take a few more risks. That’s the difference in the game. It maybe comes down to that score.”

Sexton, though, looks around the team room and notes a nice blend of talent, experience and youthful braggadocio. “It’s got a few of the really experienced guys, with Paul [O’Connell], Brian [O’Driscoll], Darce [Gordon D’Arcy] and Rory Best; these guys that have won the Grand Slam, won in England, won Triple Crowns.

Learned a lot
“Obviously, the other guys underneath that have been in the middle, they were on the outskirts of that Grand Slam winning team. They would have learned a lot from then, but haven’t really achieved success. We’re hoping to take that next step.

“We’ll rely on them and we’ve got the younger guys coming through, who are hungry as well and pushing everyone on. I think there is the right blend there and we do have the right guy in charge to lead us forward. Going to Twickenham, the last three times we’ve played them, they’ve beaten us. That’s says a lot.”

His point is if Joe Schmidt gets a full deck from which to deal, Ireland could go all-in in realising ambitions.

It’s easy to forget Sexton, for all his honours with Leinster, has yet to claim silverware with Ireland. He admitted: “I thought it was easy in my first season – straight in – we beat South Africa and were playing Scotland for a Triple Crown.

“I just thought it was going to be the first of many, just continue on from the generation [before]. It just hasn’t worked out like that for numerous reasons.

Triple Crown
“I remember that Scotland game. It was almost like the Triple Crown wasn’t the big deal because the guys had just come off the back of four Triple Crowns in a short space of time.

“Now, it would be huge after the last few seasons we’ve had. I took it for granted. Looking back, I would have loved it. I haven’t won one. It would be fantastic to do it. It would be another stepping stone to potentially winning the championship. You can’t do either of them without beating England at Twickenham.”

Sexton pays tribute to the coaching staff and management who have devised the game plans for the two victories to date, pointing out Schmidt still demands a heads-up philosophy from his players and that Ireland have shown very little of their back play algorithms.

“I think the fundamentals of his style are still there, he still gives you licence to go out and play what you see. He’s also clever enough to know that you have to play differently against different teams.

“A lot of our stuff has come off phase play, whereas we had a lot of stuff prepped, even against Wales, off first phase. For whatever reason, it just didn’t happen. We haven’t shown our hand, which is a positive from our point of view. Most of the moves we practised we haven’t played in the match and we can hopefully pick the ones that might work against England.”

And maybe earn some silverware in a green jersey.

Former Barcelona president Bartomeu arrested after club offices raided 12:41
Echoes of Berlin 1936 . . . Should Beijing Winter Olympics be boycotted? 10:01
The Offload: Ireland women must be allowed to move with the times 10:00
Tiger Woods touched by red and black tribute by fellow players 08:52
England prop receives death threats for not clapping Wales off the pitch 08:29
Crossword Get access to over 6,000 interactive crosswords