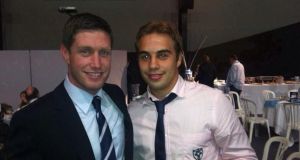 The great American football coach Vince Lombardi once observed that “the price of success is hard work, dedication to the job at hand, and the determination that whether we win or lose, we have applied the best of ourselves to the task at hand”.

It’s a mantra that exemplifies the work ethic and attitude that the 22-year-old James Hart has displayed in forging a career in professional rugby. Last weekend the Dublin-born scrumhalf scored 16 points for Grenoble in their 22-20 victory over Racing Metro 92 in the latter’s Paris citadel.

Three penalties from 40, 35 and 50 metres, and a conversion from close to the touchline following his own try – he displayed some neat soccer skills to nudge the ball over the try line and win the foot race – earned him not only a place in Midi Olympique’s team of the week but also saw him singled out as the player of the week in the top 14 Championship according to the French newspaper.

“Jambo”, as he is known to friends and team-mates, has made the match-day squad for all nine of Grenoble’s Top 14 matches this season, starting three games. He has a contract until 2015 but the French club is pressing him to put pen to paper to extend that commitment until 2017. Those are the superficial optics but there is a grittier tone to the core of the tale.

Remarkable perseverance
Hart has shown remarkable perseverance, dedication and mental strength to augment talent. He has overcome setbacks on and off the pitch with a resolution that is truly admirable. His father passed away with a brain tumour when he was 13 years old, following a three-and-a-half year illness. This was a man who spent hours kicking a football with his son, driving him to matches and nurturing a love of sport in a very hands-on manner.

He has “huge admiration” for his French-born mother, Patricia, who he singles out as a “great inspiration” for the way in which she coped with the loss of her husband and provided the glue for the family unit – he has two sisters Emily and Kate – in what must have been a very difficult time.

Hart had joined Clontarf as a six year old to play mini rugby but his first love was soccer. He played for Belgrove United and it was only his impending move to Belvedere College that persuaded him back to rugby. The next six years were a jumble of recognition and rejection.

He played for the Junior Cup team, didn’t make the Senior Cup team in fifth year, was vice-captain the following year while also playing for the Leinster Under-19 team but then made neither the Leinster Academy nor the provincial Under-20 team. His versatility – he played scrumhalf, outhalf and centre – compromised a desire to devote time to the one position.

As a teenager Hart had but a familiar figure in Clontarf RFC spending a huge amount of time at the club, practicing all aspects of his game. Mario Kelly took a special interest in helping young Hart develop his game and it’s a relationship that endures in the form of a Sunday night phone call to discuss amongst other things that weekend’s game.

In transition year, Hart spent eight months in Toulouse living with his grandparents, and attending the local school as well as joining the cadet players at Stade Toulouse. On leaving school he decided to commit a year to playing rugby, working on his game in the morning, helping to train the Belvedere College SCT in the afternoon and then at night training with Clontarf, for whom he played Under-20s and first team.

Jackman invitation
In August of 2011 he accepted an invitation from Grenoble – Bernard Jackman who knew Hart from Clontarf and was acting as a consultant to the French club – to come over for a trial. He was accepted into the academy Grenoble were in French Pro D2 at the time. Within a month he was training with the first team.

He admitted: “That first year was hard and there were times when I wanted to pack my bags but I just sucked it up and concentrated on working harder. The academy lads lived in a block behind the pitches. It wasn’t glamorous. I looked on it as an apprenticeship. The following season I played some Top 14 games and in the Amlin Challenge Cup.

“I owe so much to Birch (Bernard Jackman). He’s been a massive help and gives me great advice. This season I have been in every match-day squad. I know I’m not necessarily the most talented player but I appreciate the importance of hard work and dedication.

“I would obviously love to go on and play for Ireland but that’s so far away. My focus is on playing for Grenoble and being the best player I can be for them.”

On the evidence of his career to date, he not only deserves everything he’s achieved but offers inspiration that a conventional route is not the only pathway to success in professional rugby.