Connacht opt for blend of youth and experience for Glasgow trip

Daly will play in midfield for the visitors, while Fitzgerald continues on the right wing 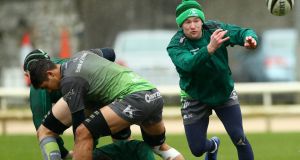 A Connacht training session in the Sportsground, Galway, before the trip to Glasgow. Photograph: James Crombie/Inpho

It’s the clash of the second and third placed sides in Conference A table – there are nine points between them – and Connacht, despite being without a number of their international contingent, will still be less destabilised in personnel terms than their hosts; an example of which is that wing Kyle Steyn and centres Paddy Kelly and Stafford MacDowall have each yet to reach double figures in appearances for the Scottish club.

In the absence of Bundee Aki and Tom Farrell, Kyle Godwin will partner Tom Daly in midfield, Stephen Fitzgerald continues on the right wing, while his brother Conor takes over from Jack Carty at outhalf. Having managed 20 minutes as a replacement last week, Kieran Marmion starts his first match following injury.

Connacht coach Andy Friend said: “It is extremely tight in our conference, with only a few points separating four or five teams, so every game takes on an even greater importance now. We have picked a side with a good blend of youth and experience, and I have full confidence in them to get a result.”

It will be important to Connacht’s hopes that they are solid in the set-piece and competitive at the breakdown. The presence of players like Paul Boyle, Caolin Blade and Cian Kelleher should give the visitors some impetus later in the game.

It won’t be easy, but if Connacht have genuine playoff aspirations then these are the opportunities they need to grasp.