Ireland under-20 travel to Italy in confidence 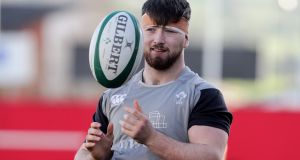 Victories over England and Scotland see Noel McNamara’s Ireland squad travel to Italy in good spirits, the optimism justified on foot of their performances to date. There will be a little added spice to the contest as these teams are in the same pool in the Junior World Championship tournament in Argentina this summer.

The Italians make five changes to the side that were thrashed 42-12 at home to Wales last time out. The Ireland side shows two alterations, Craig Casey who missed the Scotland game through injury, reclaims the number nine jersey, while Angus Kernohan makes his first appearance of the campaign having won five caps at under-20 level last season.

Ireland were made to graft for their 24-5 win against the Scots in treacherous conditions of gales and rain in Netherdale, relying on yet another excellent collective display from a pack that contributed the lion’s share of the tries.

Centre Liam Turner deservedly won the man-of-the-match award, an integral part of a three-quarter line that has the quality and talent to capitalise given a half decent platform.

Outhalf Harry Byrne has blossomed this season as a senior player and game manager, wearing the responsibility with ease. Callum Reid, Ronan Watters, Ben Healy and Billy Scannell, young brother of Niall and Rory, are set to win their first caps from the bench.