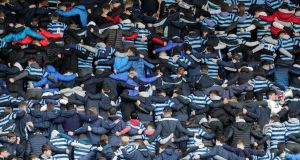 Leinster sent a letter to the eight schools involved ahead of this week’s senior cup quarter-finals to ensure current students and past pupils are aware of the consequences for “drinking and anti-social behaviour.” Photograph: Inpho

The Leinster branch of the IRFU have issued a warning to rugby schools competing at Energia Park in Donnybrook, warning that An Garda Síochána are “at the point now where action must be taken when incidents occur.”

The Gardaí and Sword Security - the firm employed at matches in Donnybrook that can attract crowds close to the 6,000 capacity - noted “fireworks and smoke bombs” have been thrown onto the pitch and into the crowd.

“Derogatory name-calling from the stand to players, match officials and other supporters” was also a repeated issue, with the Leinster branch stating “this is a problem created by a minority but now impacting on the majority and we have been advised and have received representation from the Gardaí that we are at the point now where action must be taken when incidents occur.”

In a letter to Castleknock College “Pastmen,” headmaster Chris Kinder wrote: “The Leinster Schools branch have issued a new letter looking for co-operation from all spectators. While most of the contents of the letter refer to [current pupils] side of the pitch, they have specifically asked principals to contact their past-pupils unions.”

Former students tend to congregate on the terrace at Energia Park across from the main stand.