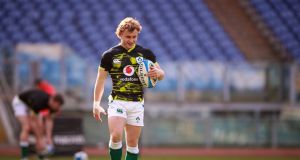 Craig Casey featured in the win over Italy but heads back to Munster this week. Photograph: Inpho

Following Ireland’s win over Italy on Saturday the IRFU has released 13 players back to their provinces. The players will get some game time in next weekend’s two interprovincial Pro14 clashes.

While Ed Byrne, Ross Byrne, Rhys Ruddock and Josh van der Flier are released for Leinster’s top of the conference (A) clash with Ulster, who themselves can avail of Stuart McCloskey and Tom O’Toole on Saturday evening in Belfast.

A number of the players released featured in last weekend’s Pro14 matches, while Casey is the only one of the 13 who featured in Rome. Munster are currently top of Conference B, nine points ahead of Connacht. While Leinster lead Conference A by six points after 13 rounds.

There’s no further update on injuries picked up in Rome to Jordan Larmour (hip), Tadgh Furlong (ankle), Dave Kilcoyne (HIA) and Ronan Kelleher (ankle). They all continue their recovery under the supervision of the national medical team and will be further assessed later in the week.

A 23 man panel has been retained for the two day mini-camp on Thursday and Friday this week at the IRFU High Performance Centre at the Sport Ireland Campus.