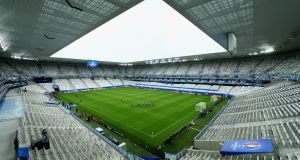 If the secret to winning major tournaments - or even progressing beyond the quarter-finals - is peaking at the right time, then September 23rd will be circled on Irish calendars after the pool fixtures for the 2023 Rugby World Cup in France were released on Friday.

That is the date Andy Farrell – providing he is still at the helm – will lead his side into a third round clash with the defending world champions, South Africa, at the Stade de France. A daunting but mouth-watering proposition.

Ireland will be hoping to head into the fixture on full points, after they were drawn to play two qualifiers in the opening two rounds.

On Saturday, September 9th they meet the European runners-up in Bordeaux – this is likely to be one of Georgia or Russia, who they faced in the 2019 pool stages.

Ireland’s second fixture will be played in Nantes against the winner of an Asia-Oceania play-off, with Tonga or Samoa – another side they met in 2019 – the likely opponents.

Then it’s a first trip to the capital and the familiar surroundings of the Stade de France, where the Springboks will be lying in wait.

Two weeks after a bruising encounter with the world champions they take on Scotland in Paris on October 7th, a fixture which is likely to be a straight shootout for the knockout stages.

Should they progress, Ireland will then meet the winners or runners-up of Pool A, which includes France and New Zealand, on the weekend of October 14th-15th – again at the Stade de France.

The tournament will be given a highly-charged opening when the hosts meet the All Blacks in Paris for a September 8th curtain-raiser – the latest chapter in their storied World Cup history, with the losers knowing they could be facing Ireland in the last-eight.

Elsewhere, Wales once again find themselves grouped with Fiji and Australia – they meet the Pacific Islanders in the opening round on September 10th before meeting the Wallabies in Lyon in round three.

England, beaten finalists in 2019, begin their campaign against Argentina in Marseille on September 9th, followed eight days later by a clash with Japan in Nice.

Attending fixtures still seems a distant dream – but details of when and where tickets will go on sale will be announced on March 4th. Fans wishing to register their interest can do so at tickets.rugbyworldcup.com.

The first tranche of tickets will be made available to World Rugby’s official travel partners next month with Killester Travel operating as the Irish agent.