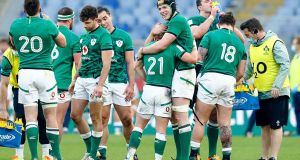 Ireland’s Craig Casey celebrates with Ryan Baird after they both made their international debut in the victory over Italy at the Stade Olimpico in Rome. Photograph: Matteo Ciambelli/Inpho

There’s nothing like a restorative, pick-me-up trek to Rome. Suddenly, in stark contrast to the injury-afflicted team pulled together to face France a fortnight ago, the Irish think tank look like having an abundance of decisions to make, and from a position of relative strength and health.

This presumes that the two-week break before facing Scotland at Murrayfield will afford those with minor knocks or niggles – Jordan Larmour (tightness in his hip), David Kilcoyne (who failed his HIA), Rónan Kelleher (dead calf) and Tadhg Furlong (rolled ankle) – ample time to recover.

In making seven changes to the starting XV for Saturday’s 48-10 win in the Stadio Olimpico, it seemed as if Andy Farrell and co might have been experimenting slightly, or at any rate ensuring match minutes for as many players as possible.

Kilcoyne and Kelleher, for example, made 25 tackles between them and missed none, adding plenty of ballast in tandem with Furlong and they certainly emptied the tank. Tadhg Beirne and Will Connors will be equally hard to displace after their energetic efforts, and ditto Jamison Gibson-Park.

“I thought it was great and it’s a hard balance isn’t it really?” said Farrell of the performance by thus rejigged team. “There are guys that need game time and sometimes you can go through a competition where if guys don’t get the game time and other guys fall over towards the end of the competition, then people are going to be underdone.

“So I thought that worked pretty well today, and then there’s guys that are coming back into the equation like Jack Conan. I thought he was very effective coming into the game. Ronan had his chance, I thought he was good. James Ryan has not played for a few weeks. Johnny has not played for a weeks. So the lads that came back really stepped up and we always say competition for places is vital for any team to keep growing.”

There are also decisions to be made in the back three, particularly between Larmour and Keith Earls, and such has been the manner in which Hugo Keenan has taken his chance, and took his try on Saturday, Jacob Stockdale may even struggle to make it back into the match-day 23.

Stockdale made his comeback for Ulster on Friday night in their win over Ospreys and should feature in their crunch Conference A summit meeting with Leinster at the Kingspan Stadium next Saturday night.

Indeed, asked about the possibility of Stockdale coming back into the frame, Farrell said: “I don’t know. We’ll see. There’s no doubt, all being well, that Jacob will play against Leinster next week, so we’ll watch and assess that.”

As for the performance of a back-row combination playing together for the first time, Farrell said: “Well, they did what we know they can do. Will’s energy, he’s so underrated in attack as well because he punches onto the ball so well. His work-rate is phenomenal but his energy, you can see the energy.”

“Will wouldn’t be a big speaker out there on the field, a big communicator but his body language is priceless to the rest of the team and people feed off that and it’s exactly the same with Tadhg. Tadhg is not running around shouting all the time or making massive hits but what he does at the breakdown and how he gets involved into the attack, it’s proper intent into his game.

“So I thought they were great but I also thought that CJ at [number] 8 has been really good over these last three games. His work-rate has been world class for sure, like it always is and he was carrying with some real good intent.

“So I thought the balance was pretty good and then Jack Conan coming back in after a couple of good games. He’s been out for a while, Jack, he’s been injured and he’s not played at this level for quite some time so to get that turnover steal was great. I thought he was hard to handle with his carries so the back row is in a good place.”

Allowing for opponents whom these Irish players feel comfortable and confident expressing themselves against, Saturday’s inventive, ambitious and clinical performance should instill timely belief for the remaining two games against Scotland and England.

“They bear the fruits of what they’ve been trying to achieve over the last couple of weeks and yeah, I suppose, to see it in action anyone would gain confidence from that,” admitted Farrell, before their charter flight home and a four-day break from their bio-secure bubble.

“We’re able to dust ourselves off and keep reflecting on the bits that we still need to improve on. Yeah, parts of that were better today, but they’ll need to be better again to get two more results from our remaining fixtures.”

The official post-match stats only credited Ireland with five offloads, but two of them were try-scoring assists.

“What I was really pleased with was that we were connected in our attack,” said Farrell. “We were all pushing together, we had proper good intent from our forwards, punching well, and our backs were nice and connected with that. When that tends to happen, you tend to get momentum and you tend to get the offloads on the back of that.

“That was pleasing in parts, certainly in a couple of tries in the first half. Could it be better? Of course it can, and it’s something that we’ll improve on in the next couple of weeks hopefully.”