Ireland name full-strength side for semi-final clash with England 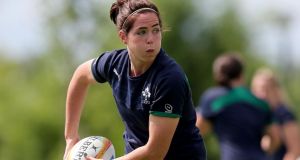 Ireland made 10 changes for the final pool victory over Kazakhstan after two intense and physical pool encounters against the USA and New Zealand.

Niamh Briggs returns at fullback and first-choice wingers Ashleigh Baxter and Alison Miller either side of the midfield pairing of Lynne Cantwell and Grace Davitt, who will start a fourth match together in the tournament.

Tanya Rosser moves back to scrumhalf after playing No 10 against Kazakhstan to allow for the return of Nora Stapleton at outhalf.

Skipper Fiona Coghlan and Ailis Egan return either side of hooker Gillian Bourke in the frontrow and the Old Belvedere pairing of Sophie Spence and Marie Louise Reilly are back in the secondrow.

The final two changes come in the backrow, with Claire Molloy in at openside and Heather O’Brien returning at No 8 after recovering from a finger injury, letting Paula Fitzpatrick move back to blindside.

England make six changes including the return of captain Katy McLean at outhalf in place of Ceri Large after she missed the final two pool games. She forms a new halfback partnership with with scrumhalf La Toya Mason.

“This is a hugely experienced side and it is a settled side too with the core of this team playing three out of the four games in this World Cup,” said England head coach Gary Street.

“Ceri Large has done a great job at flyhalf for this tournament but it is great to welcome back Katy who is feeling fresh and ready to go.”

1 Six Nations: Ireland are contenders but England still the team to beat
2 Owen Doyle: Creeping professionalism of schools rugby a threat to the game
3 Mike Catt hopes to have Irish backs purring in Six Nations
4 In Donegal Michael Murphy is seen, simply, as a godsend
5 Gary Neville in Qatar an exercise in semi-journalism
Real news has value SUBSCRIBE

Sam Bennett settles for third in penultimate stage in Australia 11:49
Ryan Palmer seizes initiative at Torrey Pines with stunning 62 11:39
NHL Division 1A: Malachy Clerkin’s team-by-team guide 07:00
NHL Division 1B: Malachy Clerkin’s team-by-team guide 07:00
The world spins but it’s soon back to Dublin and Kerry 06:00
Here is your handy guide to sport on television this week