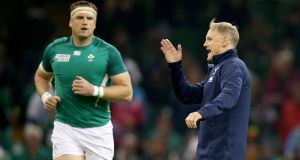 Aha, the great Irish captaincy debate. Whoever you might want as Ireland rugby captain, the only sure bet is that only Joe knows who is on the shortlist. But we media will have our say anyway.

The Great Man theory, popular in the 19th century, set forth that history is dominated by a series of Greats who bend things to their will.

From the external perspective, viewing team leadership through the lens of a single ‘captain’ is a handy shortcut. But sports leadership is not a single job.

Much leadership research is based around the shared rather than the individual.

Leadership groups, made up of formal and informal team leaders – the captain and his officer corps. Even with Richie McCaw as captain, Graham Henry and Wayne Smith spoke of the value on the onfield and off-field leadership groups with their All Blacks of 2004-2011.

In ‘The Myth of the Team Captain as Principal Leader’, a 2014 paper published in the Journal of Sports Sciences, Katrien Fransen et al examined the importance of four components of sports team leadership.

Task leaders and motivational leaders were perceived to be most important, in that order: executing a gameplan, issuing instructions and motivating team-mates to do what’s necessary on the day to make something positive happen, no matter what the odds.

The next two roles are primarily conducted away from the field: social leaders, who have the emotional intelligence to ensure the group functions as a successful social unit; and lastly, external leaders, who serve and help control outside pressures and interests.

Last Sunday the view was put forward by Peter O’Reilly, respected rugby writer of the Sunday Times, that Jamie Heaslip “has the rugby intelligence to implement a gameplan on the field, but off it he lacks the humility which Schmidt preaches. Basically, he fails to grasp the concept that the public’s attitude towards you is conditioned by your attitude towards the media.”

“The media” takes many forms. Some will immediately think of newsprint, others of online, some of radio and others of the television half-time panel. There is social media, providing direct communication between fans and athletes (or between fans and an athlete’s PR handler).

When it comes to attitudes to the media, these things are all relative. Alex Ferguson refusing to speak to the BBC for seven years was a bad media relationship.

“I’m just here so I won’t get fined,” said star running back Marshawn Lynch, who ended his media silence under the threat of an NFL fine reported by ESPN to be half a million dollars. Silence was probably better than Brendan Venter’s deliberately farcical post-match interview after Saracen’s loss to Racing Metro in the Heineken Cup in 2010.

While there are those in this business who would prefer more free-ranging access to players and coaches rather than dealing with PR-provided straitjackets, consider the concept of “preferred media partners” (Newcastle United’s deal with The Mirror) or a club attempting to abandon traditional media access in favour of interviews conducted and presented by a club’s in-house head of PR (Swindon Town).

The raising of a player’s manner in some dealings with the media in the context of the Ireland captaincy will be seen by some as absurd. How could it possibly have an impact on his role as a leader of men? Who do the media think they are, thinking that they play some key factor in who gets the job?

As is so often the case, both sides have valid points. A particularly interesting result of Fransen’s research was that only a very tiny percentage of athletes were identified as being a team’s leader in all four components. The captain could be external leader and task leader, for example, while somebody else gets people revved up emotionally. This remained true across sports and levels.

But when it comes to being the captain of an elite sports team, the external, including the media, is a mandatory part of the gig. Press conferences and interviews, functions and launches. Be a good face for the team, deflect pressure from others; perhaps on occasion, even be interesting. Sponsors like a good face, and elite sport has a lot of sponsors to keep happy.

When trying to forecast who Ireland’s next captain will be, the first question should be to work out which leadership roles Schmidt will want his captain to take.