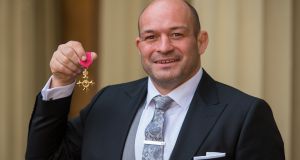 Rugby player Rory Best with his OBE medal, which was presented at an investiture ceremony at Buckingham Palace, London. Photograph: Dominic Lipinski/PA Wire

Ireland rugby captain Rory Best has spoken of his “immense pride” after being awarded an OBE (Officer of the Order of the British Empire) at Buckingham Palace in London.

The veteran hooker was joined at the palace by his parents, who have both been decorated with MBEs, as he received his honour from Prince Charles.

He said: “I suppose they can’t really believe it. When I first told my family they were shocked but absolutely delighted — it means a lot to our family, especially with mum and dad having received MBEs.

Receiving the honour is his greatest individual accolade to date, he added.

“You play rugby because you love it and then all of a sudden you get these awards, but I think of all the individual awards I’ve received in my career this is certainly the highest.”

Best, who led Ireland to a first ever win on home soil against New Zealand last Saturday, has been capped by Ireland more than 100 times and toured with the British and Irish Lions in 2013 and 2017. - PA