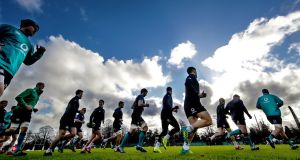 A general view of Ireland training ahead of the final Guinness Series meeting with the USA. Photo: Billy Stickland/Inpho

One of the healthiest aspects of this Irish squad, in addition to its winning habit and much else besides, is that it has never looked more difficult to break into. Eleven months out from the World Cup that, of course, is how it should be.

Put another way, 43 into 31 will not go, and of the original 43-man squad selected for this four-test autumnal window, all but ten remained in Carton House this week. Granted, many of those who started in both the wins over Argentina and New Zealand are likely to be rested for Saturday’s finale to the Guinmess Series finale against the USA at the Aviva Stadium.

Of the remaining 33, five have had no involvement (Rob Herring, John Ryan, Stuart McCloskey, Sammy Arnold and Darren Sweetnam) in the three wins to date, while a further four have yet to start a game, namely David Kilcoyne, Finlay Bealham, John Cooney and Ross Byrne.

Having worn the bibs for the last few weeks, it seems only fair that opportunity will knock this week for a number of contenders battling to make the 31-man World Cup squad. However, as the Six Nations is a stand alone tournament given added prestige by Ireland entering their opener at home to England as reigning Grand Slam champions, it offers comparatively little scope for experimentation.

Hence this could be a huge game in the careers of many of these players.

At face value it also looks like the mother of all no-win scenarios, for how on earth does a much changed team follow up such a compelling 80 minute performance as last Saturday’s first Ireland win over the All Blacks in 17 attempts and 113 years?

According to kicking and skills coach Richie Murphy, “I think if you look at the three games so far, there’s been a steady progress. This week against the USA we want to continue that progress because we always want to try and get better.”

“So I think it’s about guys knowing their role, it’s about guys being able to execute that role and bringing us forward, rather than stagnating now and being happy with what we have.”

It is not necessarily about standing out individually, and nor will a lack of familiarity in certain combinations constitute an excuse.

“We would very much be of the view that our team has always been about the collective,” says Murphy. “It’s not about the individuals that are within it. One of the things that we would strive for is that it is seamless; that you come into an environment, you come into both attack and defence, and that you understand what your role is within that. And that you seamlessly go into that situation.

“Some of the combinations won’t be fully naturally and maybe won’t have played together before but everyone understands the philosophy of our defence and the philosophy of our attack and what we are trying to achieve. As long as they can buy into that and work together, they will solve the problems that they need to on the pitch.”

Midfield is something of a classic example. The frontline midfield trio of Bundee Aki, Robbie Henshaw and Garry Ringrose already looks cast in stone for some time to come barring injury, while Will Addison’s versatility could make him a fourth centre-cum-full-back and he seems sure to feature in one of those roles on Saturday. Chris Farrell, man of the match on his last appearance against Wales in February, is one of the few on the outside who might yet force his way back in.

As for the other centres in this squad, Sammy Arnold is uncapped and Stuart McCloskey’s debut was against England at Twickenham in the Six Nations three seasons ago, while his second cap was against Fiji last November.

“I think his decision-making process has got a lot better,” said Murphy. “He is a big man playing in the centre at what, 6’4” and 112 kilos? So he is obviously a very effective ball-carrier.

“How he links up defensively is obviously going to be very important at the weekend. The USA will bring a very physical game-plan with their centres carrying very, very hard in the middle of the park so there will be a test there for our 10-12-13 channel,” said Murphy, no doubt mindful that one of the Eagles best performers is their New Zealand-born centre of Tongan extraction Paul Lasike, formerly an American footballer with the Chicago Bears.

The Eagles’ other centre Bryce Campbell scored both tries – the first set up by Lasike off a scrum – in last Saturday’s 31-5 victory over Romania in Bucharest. That ninth win in nine tests this year, including a win over Scotland, lifted the USA to their highest ever world ranking of 13th, ahead of Georgia and Italy.

“I think the big thing for Stu is to go out and apply himself in relation to what we are trying to achieve in attack and bring the game to them rather than waiting for them,” said Murphy.

Murphy also said this Saturday’s game would be a good opportunity to see more of Joey Carbery, and ditto Ross Byrne after his first 20 minutes of Test rugby against Italy in Chicago following an uncapped tour of Australia.

“It could be another opportunity this week,” admitted Murphy. “Ross is a very intelligent player, thinks very well in relation to how he gets others into the game and is very much a facilitator.”