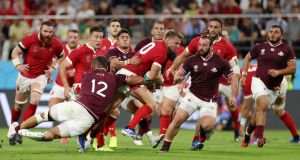 If Wales at this World Cup is a three act play then scene one of the second just unfolded; a calming, clinical victory to follow the stunning pre-tournament drama of Rob Howley’s alleged betting scandal.

This opening night had people peering in on the off chance that Georgia would be to Japan 2019 what Japan were to England 2015.

Brighton revisited can wait, perhaps forever, as Mamuka Gorgodze’s big men were filleted, despite so many of them earning decent coin in French club rugby, by highly motivated Grand Slammers.

Warren Gatland is a wise old fox who specialises in hauling embattled men up and out of the doldrums. It will be etched on his tombstone.

Offer the smiling Kiwi adversity and he’ll unearth opportunity. Ask the Connacht elders. Ask the Ireland elders during the calamitous year of 1998.

“You just got to draw a line in the sand and you got to move on,” said Gatland. “You can’t change the past or what’s happened. The players have been outstanding the way they have trained, the way the senior players stepped up and took responsibility.”

Paint Gatland as the clown at your peril. Lions tours may be his forte but he would love nothing more than to transfer the excruciating, lingering pain of 2011 into a glorious exit following the long decade as Wales coach.

Concerns about how his team would cope in the aftermath of their very own Saipan were quelled here. Stephen Jones should get some credit.

You can’t prepare for an attack coach who is only getting in the groove.

What’s clear is Wales will keep swinging from the hip, and with Liam Williams on the prowl they are always capable of the spectacular.

Georgia were under their sticks after two minutes when a simple but well executed Jonathan Davies try was built off incoming Leinster coach Robin McBryde’s scrum.

The incoming Munster forwards coach Graham Rowntree is overseeing these meaty Georgians. The provinces could do with both teams being sent packing by mid-October. New brooms needed back home. Rowntree won’t be long relocating to Limerick but Dublin will be deep in winter before McBryde arrives.

After Davies strolled over, thanks to snappy passing by Josh Navidi and Gareth Davies, Dan Biggar smacked the conversion off the post from point-blank range. No matter. He nailed the exact same effort inside 13 minutes when Justin Tipuric exposed a defensive system that belongs in the amateur ranks.

“You can’t expect miracles,” said Georgia coach Milton Haig, who keeps beating the drum for increased exposure to regular Test matches against Six Nations opposition. “We are not used to this speed.”

The game was cooked by half-time but Television Match Official Rowan Kitt was pernickety early on. Hardly a surprise considering the English man did not identify Wallaby wing Reece Hodge’s subsequently cited concussive tackle on Fiji flanker Peceli Yato the other night.

“We knew we had to shoot out of the blocks,” said captain Alun Wyn Jones.

You’d never know they were in turmoil a week ago. Perhaps because they weren’t. Whatever way it played out, Howley is banished from their collective mind.

Gatland has built and rebuilt successful Welsh and Lions teams around the pillars on view here. Jonathan Davies is eternally loyal to his coach for handing him the 13 jersey in the summer 2013, after telling Brian O’Driscoll his Lions career would end in the stand and not on the pitch, while Wyn Jones, Liam Williams and George North were also out there, simmering before major Pool D conflicts with Australia and Fiji.

How will the Gatland era end?

All we know is Wales look primed and powerful. Howley may be gone but Jones is back among them sooner than expected [the outhalf was replacing his former scrumhalf partner after the tournament anyway].

“It’s strange Rob not being here,” said Gatland, “but we need to support Stephen.”

Steady as he goes, twisting the spectre of disaster into opportunity, yet again. They move up to Tokyo for a major duel with Michael Cheika’s Wallabies on Sunday.