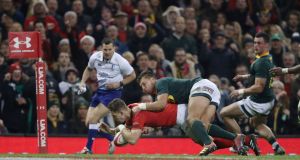 Wales completed a first clean sweep of autumn Tests and extended their unbeaten run to nine after toppling South Africa at the Principality Stadium.

First half tries by prop Tomas Francis – his first for Wales – and fullback Liam Williams sent Wales on the way to a fourth successive victory over the Springboks.

But it was a tense and tight affair, with South Africa responding to a 14-point deficit inside 16 minutes by hitting back through centre Jesse Kriel’s touchdown, plus a penalty apiece from Handre Pollard and Elton Jantjies.

Wales, though, ultimately prevailed, claiming a 10th win from 12 starts this year, with outhalf Gareth Anscombe kicking two conversions and his replacement Dan Biggar decisively landing penalties in the 68th and 72nd minute.

Warren Gatland’s team will head into the Six Nations unbeaten since the midway point of last season’s tournament, while he has also enhanced squad strength in depth through the continued emergence of players like Ellis Jenkins, Aaron Wainwright, Adam Beard and Dillon Lewis.

Flanker Jenkins, a late replacement in the starting line-up for an injured Dan Lydiate, took his chance superbly, excelling in attack and defence, but he suffered a nasty-looking injury during the dying seconds and was carried off.

Skipper Alun Wyn Jones was not far behind Jenkins in terms of work-rate and impact, and Biggar made a telling contribution off the bench as Wales equalled their longest winning run since 1999.

Both teams made enforced late changes, with Lydiate being replaced by Jenkins, who captained his country to victory over South Africa in Washington DC almost six months ago.

The Springboks, meanwhile, lost wing Sbu Nkosi, who suffered a leg injury during the warm-up and was replaced by Toulouse speedster Cheslin Kolbe, with Damian Willense taking Kolbe’s place on the bench.

And Jenkins made his presence felt just 10 minutes into the contest, making a superb run inside South Africa’s 22 before foxing Springboks hooker Malcolm Marx by throwing a dummy pass, and Francis capitalised by claiming his first Test touchdown.

Anscombe converted, and Wales were off and running, putting South Africa under further pressure, and a second try arrived six minutes later that was stunning in its simplicity.

Wales had an attacking scrum 15 metres out from South Africa’s line, before Gareth Davies rifled possession to his halfback partner Anscombe, whose long floated pass found Williams, and the Saracens back finished impressively.

Anscombe’s touchline conversion opened up a 14-point advantage, and although Pollard opened the Springboks’ account through a long-range penalty, he missed from similar range shortly afterwards and Wales held a comfortable lead heading into the second quarter.

South Africa rallied as half-time approached, though, and scrumhalf Embrose Papier’s kick and chase was only halted when he knocked on trying to collect possession after breaching Wales’ last line of defence.

The Springboks continued to press, with centre Damien De Allende spinning over Wales’ line – but Jenkins got underneath him and prevented the touchdown – then South Africa sacrificed a kickable penalty for an attacking scrum, Jenkins turned possession over and the home side led by 11 points at the break.

South Africa dominated early in the second period, yet they encountered a powerful Wales defence led by Jenkins and Alun Wyn Jones.

But the breakthrough arrived after 56 minutes when sustained Springboks pressure was rewarded after number eight Duane Vermeulen tore at the heart of Wales’ defensive line, before possession was moved wide and fullback Willie le Roux sent an unmarked Kriel over.

South Africa then made further inroads, with Jantjies booting an angled penalty to make it 14-11, setting up a tense final quarter that started with Biggar replacing Anscombe as Wales sought possession and territory.

And the Northampton number 10 immediately made his presence felt, assuming tactical control just when Wales needed it, before kicking two late penalties that ensured Wales maintained winning momentum and positioned themselves impressively ahead of another Six Nations challenge.