Rookies and veterans play their part in Ireland’s winning plays 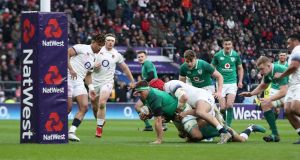 By the end, Ireland’s captain Rory Best had been replaced and the two vice-captains, Johnny Sexton and Peter O’Mahony, had been forced off, but they began leading the celebrations before the final whistle, before accepting the Six Nations Trophy and the Triple Crown trophy in turn.

On the pitch, CJ Stander captained the Irish team for the final throes of their grand coronation against England at Twickenham, somewhat fitting as nobody embodies this squad’s trademark honesty of effort more than him. Meantime, the 24-year-old Garry Ringrose helped guide a 22-year-old out-half, Joey Carbery, on his inside and a 21-year-old, Jordan Larmour, alongside him who was making only his third Test appearance off the bench and playing at outside centre for the first time since his schooldays. Joe Schmidt later revealed that Larmour hadn’t even run there in training.

At the back, Rob Kearney was helping to guide Jacob Stockdale, a 21-year-old rookie winger (not that you’d think it), and a converted scrum-half in Kieran Marmion. As with a patchwork backline that somehow put together a stunning try to beat Australia in November 2016, it didn’t matter.

Up front, there were rookies in each row: Andrew Porter, James Ryan and Dan Leavy.

Yet the machine just kept chugging along, as it does.

Admittedly, no heroics were required this time, for Ireland had earned a handsome lead through their stealthy opportunism of the first-half. This second-half performance just highlighted this squad’s resilience and willingness to work for each other.

As Ronan O’Gara declared on Twitter, the Irish pack ate their English counterparts for dinner. Once again, all the foundations were solidly in place. The Irish scrum dug in after feeling aggrieved over an initial penalty when Mako Vunipola appeared to scrum at an angle and persistently ensured ultra-secure ball or won penalties. The maul repeatedly repelled England’s many attempts to go to the corner, where the exceptional Iain Henderson (again a Schmidt selection that was completely vindicated), Stander, Best, O’Mahony and co were immense, albeit it came at the cost of a yellow card for O’Mahony.

Their numbers were startling. In addition to playing a key role in maul turnovers, Henderson made 22 tackles, Furlong 18 and Ryan 16 – as usual, with none missed. Ryan’s tackle technique, like his carrying and clearing out, are so accurate. He plays like a 30-year-old.

Stander and Leavy each made 15, and O’Mahony 10, while completing over 80 clear-outs between them, and it says everything about Johnny Sexton’s trademark competitiveness that he made 11.

Although Stander has added some subtlety to his game, he was credited with another tireless tally of 24 carries, and chipped in with a try after Furlong’s deftest of disguised transfers to Aki enabled the centre to split the English defence with a move which almost came off against England three years previously on the only occasion it had been tried. Yet we just take this as the norm from Stander now. Furlong, Leavy, Ryan and, of course, Rob Kearney were in double figures in this category as well.

“I think one of the luxuries for Dan Leavy is that you cannot discount the performances of Pete O’Mahony and CJ Stander, and that’s the cusp of everything that’s positive,” said Joe Schmidt afterwards. “It’s combinations that are complementary and guys adding value to each other is, I think, a massive part of it.”

Schmidt cited Henderson or Toner alongside Ryan, and Best alongside Porter against Wales, and highlighted the performances in the last two games of Ringrose – “super against Scotland and I thought he was outstanding today” – on the back of only six outings this season.

At the team’s hub, controlling the tempo and dictating everything, was the Conor Murray-Sexton pairing, as good as any half-back pairing in the world.

Ringrose pounced for the first try after Sexton’s on-the-money up-and-under onto Watson on the try-line came down with snow and Kearney on it. It was Murray’s quick-witted blindside draw-and-give that released Stockdale for his seventh try of the campaign, a record for the Six Nations, with the last play of the half as Ireland struck for the third game running in first-half overtime.

Keith Earls had his hands full with two-try Elliot Daly, but made a couple of try-saving tackles on the winger, as did, of all people, the corner-flagging Sean Cronin.

Kearney was once more an immensely strong presence at the back in what was his 20th start out of 20 in four title campaigns, including two Slams. Kearney broke nine tackles, five more than anyone else in the match.

“I think we beat 20 defenders. I don’t want to exaggerate Rob’s contribution but you can round that up to 10, because I thought his performance was right up there.”

Asked why he has kept going back to Kearney, Schmidt said: “I disagree. I don’t go back to Rob Kearney – I go forward to Rob Kearney. Rob Kearney goes forward. I know that is semantics but I think Rob still has a future with us. You don’t pick people if you don’t think they have got a future with you.

“I am not sure what more people want from Rob Kearney, 140 running metres last time in possession last week. If he doesn’t get that first try we don’t get into the contest,” said Schmidt. “Rob, as represented by the four Six Nations titles that he has, must have some idea of what he is doing.”

Schmidt also revealed his final words to the players.

“I just said, ‘Get out and play, lads.’ People presume there is a lot of structure in this structure because I think some of the best poetry I have ever read, it goes beyond the bounds of standard grammar. But when you know the grammar really well you can utilise what you like to get the message across. Like when players have a structure, they can go beyond that and play whatever they see in front of them. I just said, ‘get out and play, lads, and enjoy this because these are the days you have worked so hard to hit.’”

And boy did they just.