Rugby World Cup: Japan enthral a nation and beyond as they storm into quarter-finals 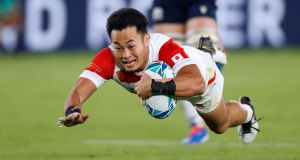 Japan’s wing Kenki Fukuoka scores a try during the Rugby World Cup Pool A match against Scotland at the International Stadium in Yokohama. Photograph: Odd Andersen/AFP via Getty Images

Some days a country is unbeatable. Ireland against England under Croke Park’s glare in 2007. New Zealand the week after any All Black loss.

And now, Japan in Yokohama mere hours after the treacherous Hagibis forced the curfew of millions.

Nobody was going home. Some people cannot go home ever again.

Normality has been suspended since Japan shocked Ireland in Shizuoka.

Normality has also been destroyed forever by natural disaster.

“We woke up this morning and 19 people were killed in the typhoon with a further 12 people still missing,” said Jamie Joseph. “We talked about that as a team. Sometimes those sorts of things can be overwhelming but I think the players, particularly when times were really really tough, it helped us. So while we are celebrating a lot of people are suffering.”

Fear no longer exists in the Japanese psyche. If it ever did. Joseph tells no lies. The huge Kiwi coach promised his team would not be consumed by expectation or the ever increasing external din.

Now, they can focus everything on repeating the Brighton miracle of 2015, on toppling the gargantuan South Africans next Sunday in Tokyo in the ultimate clash of styles.

The Springboks will get the ball.

“When we play tier one teams the first area they come for us is our set-piece,” said Joseph. “They will try and squeeze us and put pressure there, but in the last four or five games we have done ok there, and that’s allowed us to create the way we want to play the game of rugby and you have witnessed what that can be like if we can match, better or hold the bigger set-pieces in world rugby.”

After every warm-up Japan gather in a wide unaggressive huddle. After patient words in several languages they walk slowly off the field fingers resting gently on one another’s shoulders with Michael Leitch, the leader and tip of the arrow, allowing the energy of a nation flow through his body.

It’s a sight to behold.

Scotland wandered off the pitch in dribs and drabs with Finn Russell and Stuart Hogg - their mavericks - engaged in conversation.

The first deafening surge of noise rolled down from the 67,666 crowd when Russell’s speculative chip was snatched by Timothy Lafaele for an 80-metre swing.

Still, it was Russell’s ball in the early exchanges. He was not to be denied what seemed an enormously valuable early try when fending little scrumhalf Yutaka Nagare to touch down. Greig Laidlaw planted the conversion and the Scots were on track to the last eight.

That did not, it could not, last as the energy in the International stadium was truly unique.

Japan softened up their opponents with heavy bone crunching carries by Leitch and others before the superstar wingers - Kenki Fukuoka and and Kotaro Matsushima - took flight. It was crafty pass by Lafaele that put Fukuoka - Ireland’s bane - dashing down the left before sumptuous offload had Matsushima racing untouched to the line.

The locals understand the nuances of rugby now. Take the scrum penalty Keita Inagaki and Shota Horie earned before Inagaki finished off Japan’s second try. The decibel levels spiked because everyone grasped how important this was after tighthead Jiwon Koo had just been forced off with damaged ribs.

Next, Matsushima took two horrendous thumps when jinking into the Scottish 22. The string of ball handling was marvellous. The fact a hooker put a prop under the Scottish crossbar moments after they initiated the move with a nuts and bolts penalty registered.

Tamura failed to take the points but it mattered not a jot as from the next passage Lafaele’s perfectly weighted grubber bounced up for Fukuoka - now Scotland’s bane - with the third try registered before Stuart Hogg could lay a hand on the winger.

As ‘West Virginia’ - Japan’s Put Em Under Pressure these past few weeks - pounded around the World Cup final venue you wondered how far they can go, because Scotland seemed totally and utterly vanquished.

The Springboks were already in the subconscious and it eventually showed. Not before Fukuoka grabbed the bonus point try on 42 minutes.

And what an individual moment it was, as the lightweight medical student ripped ball from the grasp of big Chris Harris before sprinting clear.

It was another magical moment on a night of so much alchemy.

The contest became this wild affair thereafter with Scotland battering their way back into contention thank to tries by WP Nel and Zander Fagerson. If only every Scot could have played like Jamie Ritchie. We know every Japanese player will keep tackling like Ryoto Nakamura.

Scotland needed a miracle to strip Japan of a losing bonus point. The hosts no longer rely on miracles.