Rugby World Cup: Ireland will play the All Blacks in quarter-finals 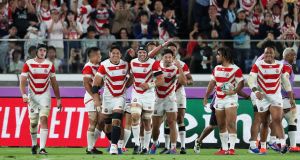 Ireland will face New Zealand in the quarter-finals of the Rugby World Cup next Saturday morning after Japan put on a stunning show to beat Scotland 28-21 in Yokohama.

The bonus point victory for the hosts confirms Ireland finishing in second place in Pool A and therefore sets up a last eight clash with the All Blacks in Tokyo at 11.15am Irish time next Saturday.

With flood waters outside the stadium in Yokohama after Super Typhoon Hagibis wreaked havoc across Japan it was a miracle that the match even went ahead but then Japan produced a miracle of their own.

Kotaro Matsushima and Keita Inagaki both went over before Kenki Fukuoka added a brace to seemingly blow the Scots away. However, a late rally from the Scots cut the gap to seven points when WP Nell and then Zander Fagerson went over to add to Finn Russell’s earlier try.

Scotland threw everything at the hosts in the final minutes but Jamie Joseph’s men held strong to create Japanese sporting history by booking their place in the last eight for the first ever time.

That means the quarter-final lineup is confirmed with England set to take on Australia, Wales facing France and Japan meet South Africa.

Were Ireland to beat the All Blacks and get to the semi-finals they would take on the winners of England and Australia.