Tommy Bowe will be available for second Test after operation 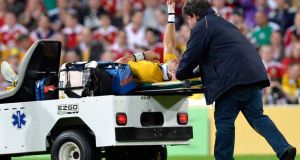 Australia centre Christian Leali’ifano gives the thumbs up to the crowd as he is stretchered off the pitch following an injury sustained in the opening minute of the first Test against the Lions in Brisbane. Photograph: Bradley Kanaris/Getty Images

British and Irish Lions winger Tommy Bowe will be available for the second Test against Australia in Melbourne after having surgery to fix a broken bone in his hand, coach Warren Gatland said on Saturday.

The Ireland star sat out the Lions’ opening 23-21 Test victory on Saturday after suffering the injury in a warm-up match against the Queensland Reds this month.

“Tommy Bowe is fit and available, he trained today and did contact,” Gatland told reporters.

England centre Manu Tuilagi will be available for Tuesday’s tour match against the Melbourne Rebels.

“Manu will be available for Tuesday. Having firepower come back and more options is hopefully going to be good for the next two weeks,” Gatland added.

Inside centre Christian Leali’ifano was taken off just 54 seconds into his Wallabies debut after picking up a head injury.

Leali’ifano was fitted with a neck brace and left the pitch on a stretcher after getting hurt while making a low tackle on Jonathan Davies. He was replaced by Pat McCabe, who himself departed in the 47th minute after also picking up a head injury at a ruck.

McCabe was replaced by flanker Liam Gill with Michael Hooper, who started as the openside for the Wallabies, switching to centre.

The Wallabies also lost fullback Berrick Barnes to a similar injury a minute before halftime when he came off worse in a collision with his team-mate Israel Folau.

Lions winger George North pushed Folau in the back as the Wallabies winger picked up the ball and crashed into Barnes by the sideline. Barnes also left the field in a neck brace and was replaced by Kurtley Beale.

Leali’ifano made a quick recovery and watched the rest of the match from the sidelines. An Australian Rugby Union spokesman said the ACT Brumbies centre wanted to go back on but was kept off as a precaution.

Leali’ifano had been due to kick penalties and conversions for the Wallabies.

Barnes was also a goal-kicking option and Beale missed two penalties in the last 10 minutes which could have snatched victory for the Australians.

Wallabies centre Adam Ashley-Cooper was also forced off with a shoulder injury in the closing stages.