Steve Hansen: 'I can’t be telling you Irish too much' 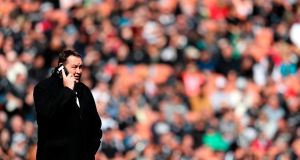 New Zealand coach Steve Hansen: “I can’t be telling you Irish too much. You are number one in the world. You should be telling us. What do you think? Think it’s a good idea?”

The long and winding Steve Hansen media tour is scheduled to end November 2nd. That last gig in Yokohama is sold out but may yet be cancelled.

All Blacks loom over every World Cup but this crop pale in comparison to what has come before. The Light Blacks perhaps, certainly not The Grey Blacks, who are forever frozen in 2007.

Chasing a unique ‘threepeat’ forces comparisons to previous incarnations of what Wallace Rayburn described as “the unsmiling giants” in his fascinating 1967 diary, when Meads and Lochore were alphas. The 2015 Twickenham farewell of Nonu, McCaw, Carter, Kanio, Mealamu and Conrad Smith shade every other team in rugby, perhaps even sport.

History, tradition and war dances pursue these men wherever they roam.

Hansen walks away after this Japan adventure but the 60-year-old former copper has been a central figure in New Zealand rugby for 15 years now, the chief spokesman since 2011.

So he gets how it all works. He cleverly uses the mystique associated with the jersey to their advantage, rather than letting expectation weigh them down. He also firmly believes that Kiwis are a cut above the average human.

He tells you as much without asking.

“To try and do things that have never been done before is a hallmark of what New Zealand people are about,” said Hansen on arrival in Tokyo. “We came away from the home shores and settled in a country at the bottom of the Earth. We had to find ways to live in isolation when life wasn’t like it is today.

“They became pioneers. That’s important in life and particularly in sport; you got to strive to be leaders rather than followers. We have an opportunity that no one else at the tournament gets; we can shy away from it or get really excited about it. We are really excited by it.”

The “home shores” being Britain and Ireland. Perhaps it would be more accurate to describe themselves as “white pioneers” because Aotearoa, to give the land of the long white cloud its Maori name, existed before James Cook mapped the coastline in 1769. In fact, Polynesians settled there in the 1250s.

However, racial and cultural interaction remains a powerful part of New Zealand life, and also among these All Blacks, as shown by hooker Dane Coles politely describing to the Japanese media why his tattoos “are part of my Maori culture and my family” but also that he covered them up at the local Onsens to respect a foreign law (the establishment in Japan continue to associate body ink with the organised crime syndicate, the Yakuza).

Hansen’s people are Kiwis. They seek to come into the wider world with “humility” but also a serious intent to be successful. That, they hope, is the perception of them; two sides of the same coin.

Three years ago a full house at the Aviva stadium witnessed their darker elements a fortnight after Ireland beat them in Chicago.

They owed Ireland a beating so they repaid. A fresh debt remains in place. During those exhilarating moments after losing fairly and squarely, once again in Dublin last November, Hansen presciently noted how difficult it would be for Joe Schmidt’s team to cope with being top of the food chain. He merrily replayed that tune from their base in downtown Tokyo.

“You blokes are number one so you gotta be the favourites,” he smiled.

When offered a tricky question Hansen tends to respond with humour or, failing that strategy, a question of his own.

“Whoever wants to be favourite’s can be favourite. It’s been proven time and time again that’s not what wins the World Cup. You gotta go earn the right to win it.”

The man knows about winning, and losing, this tournament better than anyone. In 2003 he almost guided Wales to a shock victory over England, he witnessed the Cardiff horror show of 2007, he drank from the cup of redemption in 2011 and then oversaw the utter dominance of four years ago.

How will it end?

What’s apparent above all else is the small golden trophy will not be raised aloft by Kieran Read on November 2nd if Hansen does not figure out who is their starting 10 and trusted place kicker.

Despite possessing the game’s most thrilling outhalf in Beauden Barrett, the All Blacks have turned to Richie Mo’unga since Barrett failed to kick the Lions into submission in 2017. Mo’unga has only started five test matches and after suffering a shoulder injury against Australia in August a return to Barrett, who tends to finish most games at pivot anyway, might be forced upon them.

Dan Carter’s nerveless place kicking and two drop goals guided New Zealand home in 2015, in a manner comparable to Joel Stransky at the 1995 World Cup, Jonny Wilkinson in ‘03 and the Springboks combination of Percy Montgomery and a teenage Frans Steyn in 2007. Even Stephen Donald in 2011 proved that a reliable punter is absolutely essential.

Surely, 2019 will be no different, right Steve?

“What do you think?”

“I don’t think anything’s changed really. You’ve got to have a forward pack that can give you good ball, particularly go forward ball, and a halfback that will run the game. The rest of the people around them have just got to do their job.

“There is no doubt 10s are the main computers of the game. They drive it. All the good teams have good 10s. Look at the all the teams that are coming here thinking they can win it, they’ve got good 10s and a lot of them have good nines as well.”

With that in mind, mixing and matching Mo’unga and Barrett is how these modern All Blacks intend to evolve, right Steve?

“I can’t be telling you Irish too much. You are number one in the world. You should be telling us. What do you think? Think it’s a good idea?”

Women’s British Open to go ahead but without fans 17:16
UK Sport to investigate ‘deeply troubling’ allegations of abuse in gymnastics 18:04
Tuilagi case shows England’s home-based clause is out of date 16:48
Cam Newton broke the mould: Can his flame be rekindled at the Patriots? 12:12
Pete Sampras: The forgotten great with the best serve in the business 11:10
Crossword Get access to over 6,000 interactive crosswords