With the world watching, I hope our officials have the courage to punish all cynical play 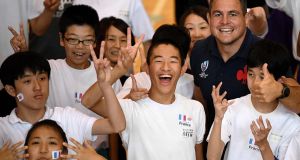 The phoney war has ended. The trial selections are over. The speculation of coaches, pundits and players has drifted into the ether. Now the festival of rugby can begin.

The pool stages of the Rugby World Cup is a brief window in the professional calendar, that remind us why rugby is “the game they play in heaven”.

The RWC Pool stages, brings the world of rugby together like no other set of matches. The Goliaths of New Zealand will meet the Davids of Canada. Trumps American Eagles will challenge, Borises Brexitering England and the unlikely bedfellows of Georgia and Fiji will meet in Japan. Now that does not happen every day.

The pools stages are serious egalitarian fun on and off the field. The French love their “troisième mi-temps”. Literally the third half, or post match celebrations, which can be more momentous than the match itself.

And so it should be.

Every four years the RWC pool stages allows us to remember why we love the game so much. Rugby is fun. To get the ball in your hands and run with it, just as William Webb Ellis did all those years ago, is pure joy.

There are also massive pivotal matches in the pool stages. The battle of the Celts, with Scotland clashing with Ireland. The Kiwis and the Boks is an enormous game. Australia’s battle with Wales is huge and the “ménage à trois” involving England, France and the Pumas will all be fascinating.

Ultimately the first month of every RWC reminds us that Rugby is blind to religion, skin colour, nationality or sexual preference, and is a community game that bridges cultures played in over two hundred countries. Very few in the rugby community are professional. Globally rugby remains predominantly an amateur sport.

Wonderfully, you will see no physical barriers between supporters at the matches. There will be no police on horses keeping the opposition supporters apart.

After the matches in the local bars and on the trains from the stadiums there will be no hooligans rioting. The most opposing supporters will throw at each other will be some very off key singing, in voices that should never be heard outside the family shower.

The players will refer to the referees as “Sir” or “Mame.” It’s old school, but it’s good school.

There will be no players faking injury, rolling around on the ground clutching an untroubled knee in an attempt to get an imaginary penalty. But you will see many players acting. Many will pretend they are not hurt, when in fact their entire body is stinging after the joy of physical contact.

Sadly, you will also see negative play and what’s worse its from the best team in the world. There is no doubt the Kiwis play sensational rugby. Their display last week against Tonga was breathtaking.

It is little wonder that their tactics and style are copied around the globe. The greatest praise is imitation and the world now plays the New Zealand 2-4-2 attacking formation.

In their last three Tests New Zealand have been ferocious at every tackle. Their aggression, technique and bravery has been exceptional. In recent years they would not commit players to the tackle, preferring to have all their players in the defensive line.

That has changed. The new tactics are smart, innovative and unexpected by their opposition. What is so disappointing is the Kiwis disciplined technique, that they possess for the other 80 metres of the field, magically evaporates 20 metres from their own try line.

Despite what some people may suggest, I deeply admire New Zealand rugby. Their style of attacking play is glorious to watch. But it is very hypocritical to state to the world that “Great people make great New Zealand rugby players”, and then deliberately cheat.

I hope our officials have the courage to punish all cynical play with yellow cards, as Law 9 also states that “a player must not intentionally infringe any law of the game” and “A team must not repeatedly commit the same offence.”

Across the world teams at international, provincial, club and schools level are watching and will copy the good and the bad behaviour of the players.

That means there is a deep responsibility on the players and coaches to uphold the ethos and integrity of the game. This applies especially to New Zealand because they are the best.

Rugby’s spectacular ball in hand attacking play is what makes it unique and delightful. As the festival of rugby begins lets all unite and make sure that wherever cynical negativity arises in the game, it is stopped and put in its place.

If New Zealand cynically infringe to stop the opposition attacking, that means their place is on the sideline for 10 minutes.