Returning to Japan after 30 years for the Rugby World Cup 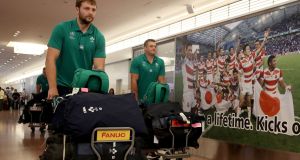 The first and until now only time I visited Japan was in somewhat extravagant circumstances. It was 1988 and the trip was the prize in an essay competition run by the Japanese foreign ministry throughout the EU.

Along with a group of other young European winners, I was treated to a two-week holiday in one of the world’s priciest countries, all expenses paid and nothing spared. Actually their preferred term was “study tour”, because the idea was to showcase as many aspects of Japanese life and culture as could be squeezed into a fortnight.

So the itinerary was a blur of bullet trains, banquets, dawn tours of Tokyo’s fish market, and nights at Kabuki theatre, with visits to model farms and factories, or historic shrines and castles, squeezed in between.

The flights alone were worth £2,300, which in 1980s Ireland would have bought you a good second-hand Toyota. But the kicker was the little brown envelopes we received on arrival, stuffed full of spending money: 250,000 yen each, or about £800 – the equivalent of two months’ net salary for me at that time.

For a lowly civil servant, which I then was, the trip was the most exciting thing that had ever happened to me. Thirty years and the birth of my children later, it remains firmly in the top five.

When at last I return to Japan later this week, as an Irish rugby supporter writing occasional dispatches for The Irish Times, the budget will be rather more restrained.

Events are also unlikely to be as well planned as the last time. As was the case for many fans, the Rugby World Cup presented me with a dilemma of whether to gamble on Ireland reaching the later stages of the competition or travelling for the group games of which we were certain.

After much prevarication, I decided late to go early, and even now am still putting arrangements together. Logistical problems include a severe lack of accommodation in Fukuroi on the weekend of the Ireland-Japan game. I may yet have to investigate those horizontal closets they call “capsules”.

On the plus side, my crash course in Japanese, using the Duolingo app, is now in its sixth week. It is, however, a daunting language, having three different alphabets, none of them in any way similar to ours, so progress is slow.

Making a meal of things

I recall that in 1988, on one of the few nights we were let out without an interpreter, we ended up in a fiercely authentic restaurant where they spoke no English and did not have the usual plastic models of meals you could point at.

A Belgian member of our group who claimed to have studied Japanese at college took it upon himself to place orders, and for those people who refused to eat raw fish, even in small amounts, he identified a dish on the menu that he assured them said “steak”.

They got steaks all right: large, bright red tuna ones, untouched by grill or pan. Consternation ensued. Unlike the Belgian, I won’t be guilty of overconfidence in my fluency, but I have already mastered a few key phrases, including: “Sorry, I do not speak Japanese.”

If the schedule allows, when not writing for The Irish Times I also hope to make a few side trips, including one to the former home of the most famous (and perhaps only) Japanese Irish man: Patrick Lafcadio Hearn (1850-1904).

Strictly speaking, Hearn was Greek-Irish. He spent years in Britain and the US too. But it was Japan he took most to heart and, in one way, his fate is a worrying precedent. He travelled there for a newspaper posting, quickly terminated. Then he got another job as a teacher, gradually went native, changed his name to Koizumi Yakumo, and never came home.