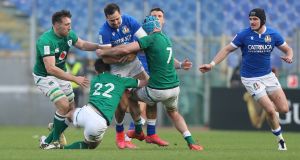 Ireland scored six tries, had three others chalked off, and squandered a handful of opportunities to further boost their points’ differential but the lightning rod of a performance that demonstrated an improvement in attacking fluency - personal and collective - was set by Ireland’s work in defence.

Italy’s defensive malaise in the tournament is well documented and once again this was a bit of a horror show when it came to basic tackling but they had posed problems for both France and England with the ball in hand. There were flashes of that attacking nuance this afternoon in Rome but Ireland shut them down far more effectively than either of Italy’s previous opponents in the tournament.

Irish defence coach Simon Easterby should be pretty satisfied with not only the bald facts of the match statistics - 92 percent tackle completion, 12 missed of 155 attempted - but also the evidence of his own eyes. Ireland’s connection in their defensive line, their speed and aggression forced Italy into a litany of errors, poor decisions, penalties and turnovers.

The indefatigable James Ryan (19) Will Connors (14), Robbie Henshaw (13), Dave Kilcoyne (13) and Ronan Kelleher (12) bristled with aggression in the collisions but also supplemented that physical application with excellent technique; they were leaders and their teammates responded wholeheartedly.

There was an acclimatisation process required initially as French referee Mathieu Raynal decided any tackler that lingered longer than a nanosecond in a ruck, or ball carrier that didn’t release immediately should be punished. He was consistent but it took Ireland 20 minutes and five penalties before the message registered emphatically.

The first couple gave Italy access to Ireland’s 22 but the visitors’ defence remained resolute and organised, offering just three points to their hosts. The Italians in contrast never absorbed the lessons and that negligence would cost points, players (they were down to 13 at one stage) and several decent opportunities in the Irish 22.

Ireland got after Paolo Garbisi - the hosts weren’t helped by the late withdrawal of scrumhalf Stephen Varney - and while the outhalf wriggled his way out of trouble impressively a couple of times, he or his teammates were collared way behind the gain-line or into throwing 30/70 passes that invited more trouble and mistakes.

Man of the match Tadhg Beirne, Iain Henderson, Connors, CJ Stander and Kelleher all forced penalties of turnovers at the breakdown in the first half an hour, the upshot of which was possession, position, momentum and prime counter-attacking opportunities for the visitors. Beirne helped himself to a couple of turnovers and at other times showed great endurance to ride several attempted clearouts and continue to slow down possession.

Ireland briefly forgot Raynal’s breakdown mantras and it cost them a try in first half injury time. Kilcoyne was penalised twice in quick succession and for the only time really in the first half, the visitors lost their shape in defence.

As Garbisi surged to the short side deep in the Irish 22, Sexton and the excellent Jamison Gibson-Park came up hard in defence, not taking the speed from the inside defenders, Tadhg Furlong and Connors. It created a dogleg, Garbisi took out the two Irish forwards and Italian flanker Johan Meyer cleverly changed his line to take the space inside the last two Irish defenders.

Kilcoyne offered a classic example of Ireland’s aggression at the breakdown soon after the interval, the Munster prop twice driving through the centre of a ruck and then forcing the home side to shovel the ball away hastily; he was having a fine game when forced off for a Head Injury Assessment (HIA) from which he didn’t return.

The arrival of the bench led to an understandable disconnect initially in terms of Ireland’s defensive line, no doubt representative of differing energy levels but that organisation quickly returned, unlike the attack where the visitors became a little ragged and linear. One or two better decisions would have led to more tries.

Jack Conan, Andrew Porter and debutant Ryan Baird all made big plays defensively and maintained that level of aggression at the breakdown and in their carrying and tackling. People may prefer to focus on Italy’s shortcomings but it shouldn’t camouflage the incremental improvements in many aspects of Ireland’s performance.

The attacking fluency in the first half may commandeer the headlines but Ireland’s defence and breakdown work outside of the first 10 minutes not only shut the Italians down but provided a launch pad to attack. There will be much tougher challenges ahead but it was a decent starting point for that journey.