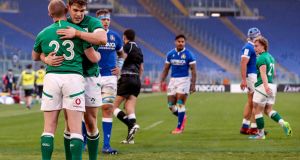 No-one benefitted more from Ireland’s improved attacking play than the excellent Robbie Henshaw and Garry Ringrose, who looked the class player that he is in his decision-making, running and passing, scoring one and creating the pick of the tries. Photograph: Inpho

Just what the doctor, and the critics, demanded as Ireland cut loose and found their clinical edge. Helped by perfect Roman conditions, having 15 men on the pitch for the full 80 and by the return of some key men, from the off Ireland were clear in their game plan and accurate in their execution.

The foundations were solidly in place again, strong set-pieces and plenty of energy, line speed and big tackling in defence. But the most striking difference was how runners came hard onto the ball from depth and at pace, as Ireland worked Italy over at the breakdown.

This helped earn the space out wide which Ireland both identified and located to find their cutting edge. Innovative and ambitious, there were some telling offloads, as they showed what a good attacking team they can be when they play with tempo and keep the ball off the ground.

Marginal selections were more than vindicated, none more so than Will Connors, whose trademark chop tackling upped Ireland’s defensive performance. He won turnovers too and scored two of Ireland’s six tries.

Tadhg Beirne picked up another man of the match gong and CJ Stander had another big game in a mightily effective backrow which outplayed the Italian loose forwards.

David Kilcoyne and Ronan Kelleher emptied the tank while there were eye-catching cameos on debut by the little and large act of a lively Craig Casey and Ryan Baird.

Controlling it all was the master conductor in chief, Johnny Sexton, running hard and straight onto the ball, pulling moves together, creating space for his teammates and also putting his body on the gain line in contact repeatedly.

A reminder then, not that we should ever have needed it, that Ireland are simply a much better team with Sexton pulling the strings.

No-one benefitted more than Garry Ringrose, who looked the class player that he is in his decision-making, running and passing, scoring one and creating the pick of the tries.

All of this was, of course, against an increasingly ragged and ill-disciplined Italy, who conceded 18 penalties to 10 and incurred two yellow cards with some crass and less than subtle indiscretions.

Mathieu Raynal was a fastidious presence, but he was consistent and, thankfully, even policed the offside line occasionally.

There were caveats, even if Italy’s intent deserved their one try. Ireland should have eclipsed France’s 50-10 win here in round one but some of the accuracy deserted them with the game won.

The home team did suffer a damaging blow less than half an hour before kick-off when their Welsh-born, 19-year-old scrumhalf Stephen Varney appeared to injure his hand in the warm-up. Callum Braley wore the nine jersey instead, with Guglielmo Palazzani restored to the bench.

Even so they were quickly into their strike, runners coming hard onto Braley’s sharp passing after Kelleher was pinged for not releasing after the tackle, and when Furlong was similarly penalised, Paolo Garbisi opened the scoring.

Bur Italy’s ongoing exit strategy of passing back to Garbisi for the kick downfield led to a penalty against Luca Bigi for advancing forward in front of the kicker for Sexton to level matters.

Kelleher came alive then, winning a penalty in the jackal, hitting Robbie Henshaw over the top and then, after a hard carry by Stander, the hooker came around the corner at speed. Hugo Keenan was within inches of the line from Sexton’s offload before Iain Henderson clearly touched down.

Despite his and Sexton’s protestations, Mathieu Raynal informed them that his TMO, Romain Poite, had (wrongly) decreed that the lock had lost control of the ball. He had, but only after scoring. Shocking officiating by Poite.

It didn’t matter, Ireland powering at the Italian line off a maul before Sexton feigned to take Jamison Gibson-Park’s sharp pass, instead allowing it to skip to Ringrose, who accelerated and muscled through Carlo Canna and Montanna Ioane for a well-taken try.

Stander forced a second turnover which led to carries by the two centres and Andrea Lovotti conceding the daftest of penalties for playing the ball while flat on the deck. Sexton made it 13-3.

The Irish pack had a couple of good moments when Italy went to the corner, Tadhg Beirne spoiling the line-out and Kilcoyne, after countless resets, won a scrum penalty.

Henderson and Connors earned another turnover penalty at the breakdown, and Ireland struck with a beauty. Gibson-Park and Sexton combined on the blindside off a maul to release Jordan Larmour and after Ryan pulled the ball back Ringrose offloaded before hitting the ground to meet Keenan’s superb line from depth for another fine finish from 30m out. It looked like it came from the framework devised by Mike Catt.

It had everything, earned initially by good defence, strong set-pieces, identifying and locating pace, with offloads and players coming onto the ball at speed.

After Stander won another turnover, more sustained, hard, straight carrying - notably Furlong and Kilcoyne - led to Kelleher being the playmaking pivot as Sexton wrapped to link with Larmour and his offload put Connors over.

However Italy had the final say of the half when their policy of going to the corner and also rewinding back to the right hand side of the Irish defence saw Garbisi take the tackles of Connors and Furlong to offload for Johan Meyer to bust through Larmour. Garbisi also converted well.

Keith Earls replaced Larmour at the break and on the resumption Italy coughed up another needless penalty for offside from their exit strategy. The pack kept it tight off the line-out maul and Furlong was within a blade or two of the whitewash before Stander did so for his sixth try against the Azzurri to secure the bonus point.

Both teams then began using the full width of the pitch, Gibson-Park hitting James Lowe with a beauty and Beirne making another gallop up the same wing moments later, but both packs were also pinged at attacking lineouts for lifters moving infront of the catcher.

The Irish pack went to work again and replacement tight-head Giosuè Zilocchi was binned for playing the ball on the deck close to the line. By opting for the scrum, Ireland forced Italy to re-introduce Marco Riccioni and sacrifice Monty Ioane.

A scrum penalty, a quick tap by Kelleher, and Stander plunged over again but French referee and TMO spotted a slight fumble in the build-up. After a quadruple substitution saw debuts for Baird and Casey, Italy were reduced to 13 men when losing captain Luca Bigi for his team’s repeated offsides, and Connors held the ball at the back of a maul to score his second try.

Baird atoned for missing the restart by latching onto a loose ball for his first trademark, knee-pumping gallop in test rugby. Ireland stretched the Italian defence patiently but Lowe’s run-in was disallowed after Poite detected Casey’s pass was forward, and another attacking lineout was rightly pinged for blocking by Andrew Porter.

A loose pass by Billy Burns, on for Henshaw, botched another move but Ireland eased their frustrations off yet another penalty. Sexton putting Earls over in the corner for his 33rd test try when firing out a skip pass. Sexton completing the 80 plus, even faded the touchline conversion between the posts for an eight from eight, 18-point haul.

Smiles all round too. Good to see. But, eh, sterner tests await against Scotland and England. Over to Wales then where, as they have been saying, they’re only three red cards away from a Grand Slam.

Leinster submit detailed plans to Government for safe return of spectators 13:15
‘I shredded everyone’s nerves, I’ll try to win more emphatically next time’ 11:08
Nick McCarthy to re-join Leinster from Munster 10:38
All in the Game: Ray Hudson’s Lionel Messi love affair continues 10:00
The Offload: Parsons and Wall can lead Ireland to 2022 World Cup win 10:00
Crossword Get access to over 6,000 interactive crosswords