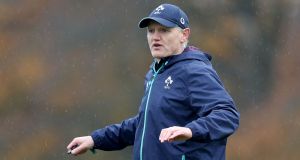 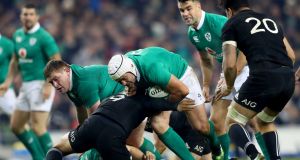 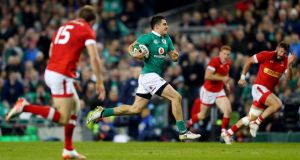 Tiernan O’Halloran’s intuitive running lines could see him feature in the Six Nations for the first time. Photograph: James Crombie/Inpho

A very good November series provides momentum, the injury portfolio is reasonable, and France and England have to come to Dublin so there is justifiable cause for optimism.

Joe Schmidt will be determined to ensure his side builds on wins over New Zealand and Australia. There are a few selection conundrums, back three, backrow and one or two places on the bench but there is a depth of quality not a lack of it, which is important. The lottery of injuries and managing selection for the final two games in eight days will have a massive bearing on the outcome.

Rory Best has proven to be an excellent choice to succeed Paul O’Connell, leading by example in terms of the quality of his performance. His work at the breakdown, tackle ethic, and support play complement his lineout throwing in his all round game.

Rob Kearney was in excellent form prior to injury, Simon Zebo has been superb for Munster but making it a three-way dispute for the number 15 jersey is Tiernan O’Halloran. The Connacht fullback, who made his debut in South Africa during the summer, is solid defensively but it his intuitive lines of running, support play, footwork and pace could win him a cap or two in the tournament.

Ireland face a tricky opening with two straight matches on the road and three in total. The addition of bonus points this year adds a different dimension with home sides tending to prosper in the try-scoring columns. France are unproven away from Paris under Guy Noves, notwithstanding and acknowledging the green shoots of November. Wales will be tricky away and England could be a chasing a world record a week later in Dublin. Ireland are good enough to beat England. It’s getting there unbeaten that’s arguably the more difficult assignment.