Hotel prices to soar almost 100 per cent during Six Nations 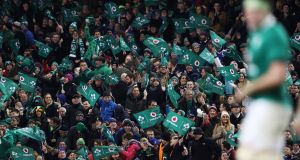 Fans visiting Dublin and Ireland fans travelling to away fixtures will feel the cost of hotel price hikes during the Six Nations. Photo: Inpho

The price of a hotel room in Dublin will rise 93 per cent for the night of Ireland’s Six Nations clash with England in March, coinciding with an increase of over 10 per cent in ticket prices compared to the corresponding fixture in 2015.

According to figures produced by Trivago.ie, the average room price on Saturday March 18th will be €302 – €145 more than the usual February and March price.

Examples show that a double room in the Lyndon House B&B on Gardiner Street will set you back €398 for the night while a two bedroom apartment at the Staycity Aparthotel on Saint Augustine Street will be €786.

The same rooms on the following Friday night – when Ireland play Wales in a 2018 World Cup qualifier at the Aviva Stadium – will cost €189 and €386 respectively.

The Lombard Pub and Townhouse on Pearse Street is the nearest accommodation to the Aviva Stadium that is not already fully booked and will cost €410 for a double room.

While the weekend of Ireland’s final Six Nations fixture is also St Patrick’s weekend – meaning there would be an increased demand for accommodation anyway – a similar situation is seen for the home tie with France on February 25th.

On that Saturday prices will increase an average of 65 per cent from €157 to €259. A night in the Jury’s Inn at Christchurch will cost €377 while the same room can be booked for €179 the following Saturday.

Ticket prices for the two home Six Nations games have also risen, compared to the equivalents two years ago.

Category 1, 2 and 3 tickets have all increased €10 for both the France and England games, while restricted view and premium tickets have gone up the same amount.

However, Ireland fans travelling to Cardiff to see Joe Schmidt’s side take on Wales on March 10th can expect to pay well over the odds for a night in the Welsh capital.

The cost of a hotel room for the Friday night is up 257 per cent on average February and March prices, going from €125 to €448. A night in the Marriott Hotel 500 metres from the Principality Stadium will set you back €851, while the Hilton Hotel in the same area is priced at €877.

With a large demand for rooms the majority around the ground are already fully booked and a Holiday Inn Express, 13km from the stadium, will cost €311.

Cardiff also shows the biggest increase across all 15 Six Nations fixtures when room prices will rise a huge 345 per cent when England visit Wales on February 11th.

The average price of a room on that night will be €558 while, in Rome for Ireland’s meeting with Italy, a double room on the same night will only cost €117 – the cheapest for any of Ireland’s games.

The opening game on Saturday February 4th between Scotland and Ireland in Edinburgh shows an increase of 134 per cent in hotel prices with rooms going from €138 to €322.