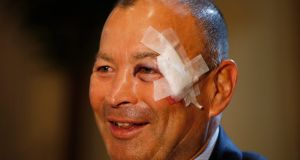 Dylan Hartley has been confirmed as England captain for the Six Nations — and was accompanied at Wednesday’s official tournament launch by a bruised Eddie Jones.

Hartley will continue as skipper for the Grand Slam defence despite being sent off for striking Sean O’Brien during Northampton’s defeat by Leinster on December 3, an offence that resulted in a six-week suspension.

While Hartley was questioned on stage during the Q&A of the annual Championship curtain raiser in south London, Jones watched on from the audience with a wound dressing around his left eye, which was bruised.

England head’s coach was hurt during a fall, but a Rugby Football Union spokesman refused to give any further details.

By the time France visit Twickenham for the Six Nations opener on February 4th, Hartley will not have played for nine weeks and his disciplinary record now consists of 60 weeks worth of bans.

When questioned about his match fitness, Hartley said: “We did this last year talking about me, I’m here on behalf of the team.

“The challenge is to use this week as best we can to get the preparation right for a huge first game.”