Not much to write home about from disappointing Roman holiday 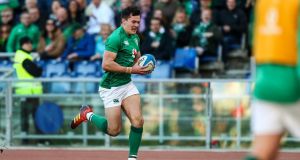 He was excellent and offered a beacon of creativity whether on the wing or in the centre and took his try brilliantly employing both footwork and strength. Rating: 7

Carried powerfully in the build-up to Ireland’s first try and in general (14 in total) and was a semi-regular option to make those hard metres; it took a physical toll, especially when he had to switch into inside centre but he never backed off. Rating: 6

He went off for a HIA after just 11 minutes and never returned. One great line break, his absence had a profound knock-on effect in the backline reshuffle. Rating: 5

Superb in the air and typically sharp in everything he did, principally for his try but also in making extra metres several times in very limited space; an excellent outing and was unlucky not to bag a couple more tries. Rating: 7

His line-kicking was superb, offset by a couple of re-start errors but he looked and played more like his old self for the most part. Rating: 6

He is a player desperately trying to play his way through a significant performance dip and for the third match in succession he initially struggled. To his credit got better as the game went on. Rating: 5

Typically abrasive in his carrying, he was one of the few Irish players who managed to make metres in contact and his tackling contained venom. Rating: 7

The lineout was a source of concern and while there was definitely a timing issue, he was guilty once or twice of overthrowing and was replaced on 47 minutes. Rating: 5

He had to take ball from a standing start but at a time when his team managed precious little momentum he was one of the few to make inroads. Rating: 7

Led his team with a mammoth 20 tackles and expended every ounce of energy on both sides of the ball in a performance of which he can be very proud. Rating: 7

Scored the second try of his international career, broke the gain-line with several carries, cleared-out powerfully and was one of Ireland’s better performers for the hour. Rating: 6

A real pest for Italy at the breakdown with a couple of trademark poaches, some exemplary lineout excellence on both Irish and Italian throws and got through his usual volume of work. Rating: 8

Penalised three times in the first half at breakdown, racking up one turnover but overall he was well corralled when he did get on the ball and departed short of 60-minutes. Rating: 5

An option at lineout time, got back brilliantly on his own line to deny Italy a try and was another to work diligently as his team struggled to find a rhythm. Rating: 6

Replacements: Iain Henderson added obvious quality, John Ryan and Jack McGrath provided a bit of impetus, as did Josh van der Flier. The bench had a positive impact in helping Ireland see out the game. Rating: 6

Coach: Joe Schmidt will be disappointed with large tranches of the match, a misfiring lineout and brittle defence. While there were sparks in terms of the attack, Ireland’s performance was fitful at best. The changes he made had a positive effect for the most part. Rating: 6