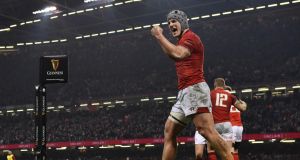 Jonathan Davies of Wales celebrates his side’s second try during the victory over England at the Principality Stadium in Cardiff, Wales. Photograph: Dan Mullan/Getty Images

Two unbeaten sides, a perfect sunny day and the kind of stage even a leading West End impresario would covet. Gatland relishes a big occasion – the bigger the better – and there is no better location on earth to watch a meaningful game of rugby.

It duly produced one of the finest results in the New Zealander’s long and increasingly distinguished career.

No Welsh side have ever won 12 Tests on the spin but, frankly, this victory topped the lot. Now it is Wales, not England, who stand unbeaten at the top of the championship table, with a Grand Slam two more tantalising wins away. And the bonus ball? Wales will leapfrog England into third place in the world rankings with the World Cup only seven months away.

Gatland and his lieutenants Shaun Edwards, Rob Howley, Robin McBryde and Neil Jenkins rightly credited their players, with Liam Williams a deserved man of the match, but this was a result to make the Rugby Football Union think.

Last month the New Zealander joked that England could not afford to hire him as their next coach; this outcome may just elevate his CV to the top of the pile.

It was built on a remarkable second half, which Wales won 18-3. Cory Hill and Josh Adams may not be the most illustrious names ever to pull on the red jersey but their tries will be gleefully toasted for decades. Eddie Jones’s red rose side, so strong initially, simply wilted as they could not stem the crimson tide.

Gatland paid tribute to his side’s fitness but also suggested England have a habit of choking on the big occasion.

“I look back on England in the last few years and, when it’s really mattered, I’ve questioned whether they can win these really big games. We’ve had a record of being pretty good in them.”

Gatland and Jones famously shared a curry before the tournament started but the days of shared poppadoms may now be over.

If it felt strangely appropriate when Tom Curry, of all people, darted over for the only try of the first half, there was only a queasy feeling in English stomachs by the end. In the final analysis Wales’s discipline and aerial game were both superior and England’s much-vaunted bench were also second-best to the home side’s “finishers”.

“We said before we left the hotel that we would win today because we’ve forgotten how to lose. You guys were all talking England up, saying there was going to be 15 points in it. We knew exactly where we were.

“I said to the players they [England] had no idea what animal was turning up this week but we did. I’ve been involved with a lot of teams and yesterday’s captain’s run was as good as I’ve ever seen.”

In its own way it was as stunning a coup as the previous English collapses of 2013 and 2015, almost a rerun of Gatland’s very first game as Wales coach on the opening weekend of the 2008 championship. Wales were 19-6 down just before the hour that day and still won 26-19, their first victory at Twickenham for 20 years.

This time around it would be easy to blame England’s demise on the penalties conceded by Kyle Sinckler but, in truth, they were merely a symptom of the increasing pressure the visitors were coming under.

Could Gatland’s men really pull it off? On came Dan Biggar, the perfect man for a tense, nervy, high-wire finale and, sure enough, Wales finished the stronger.

To concede only three penalties in 80 ferocious minutes spoke volumes for their composure, while Gatland’s decision to start Hill in the Welsh second row also paid handsome dividends.

Hill’s reputation is not as lofty as his captain’s but it was the Dragons forward who drove unstoppably through the English cover to put Wales in front. Even before Adams’ leaping salmon impression, the wily Gatland was already the toast of his adopted country.