Six Nations: Ireland look primed for a day of days 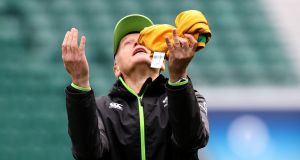 So it really has come to this. How to put it in context? Ireland have never reached a World Cup semi-final and only ever won two grand slams. One was pre-sepia-tinted, the other achieved in Cardiff nine years ago. This could therefore be one of the three best days in the history of Irish rugby, and given it could be sealed against England in Twickenham it might reasonably be considered simply the best. That’s all then. Not much at stake.

To put this in further context, Ireland have only ever beaten France and England away in the same campaign twice before, en route to that 1948 Grand Slam, and in 1972, when Scotland and Wales subsequently declined to travel.

Ireland have only ever manoeuvred themselves into this position five times, for in addition to the two slams, they were held to a 3-3 draw in Cardiff in 1951 despite scoring the game’s only try, were beaten well in 1982 in Paris having sealed the Triple Crown and title four weeks earlier, and likewise in the 2003 shootout against England at Lansdowne Road.

A little unnervingly too, à la that opening day slugfest in Paris which came down to that 41-phase drive and Johnny Sexton’s drop goal, rain is forecast. There’s also Angus Gardner as referee, who oversaw Ireland’s second-half collapse after leading 19-3 at the interval.

But it should be some occasion. Ireland’s official allocation is only 5,000 but, one imagines, even more so than ever, by hook or by crook they’ll somehow treble that at least.

Before the Championship started, one could see Ireland arriving at Twickenham with at least one hand on the trophy, but that they might be derailed at Twickenham. In light of the English Chariot hitting a few pebbles, less so now, though. England no longer look like the team at the start of the tournament, much less the grand slammers of two seasons ago, or the champions of last year. Collectively, they look a little weary, and either over-coached or over-played, or perhaps both, especially some of their Lions.

That said, they have refreshed their side with seven changes in personnel, and three positional. With the Saracens half-back pairing of Richard Wigglesworth – an outstanding kicker from the base – and Owen Farrell, and Ben Te’o outside, they look primed to engage Ireland in an aerial duel and to attack with direct, straight runners.

That reshuffled 9-10-12-13 axis, with Jonathan Joseph at 13, was the combination which played the last dozen minutes of the match in Paris and helped drag them back into the game. Furthermore, one cannot imagine they will under-resource their rucks with the same ineffectual one-man clear-outs as they’ve done in their last two matches.

If England get onto the front foot and onto the scoreboard early on, that gets the Chariot swinging, the crowd into the game, and maybe sows some seeds of doubt in the Irish players. As England also showed against Wales, they’ll back their kicking game and defence to protect a lead.

Save for that endgame in Paris, and the second quarter against Wales, Ireland have mostly been front-running, and good at it too, dominating possession and territory for long stretches. But if they can withstand any opening onslaught in the game and establish a foothold, then, although they are away from home, they are in a better place than this English team.

When all else fails, they have built up a trust in each other and their systems, as well as momentum, to keep taking the game to England with the accuracy of their set-pieces and their breakdown work. The Cian Healy-Rory Best-Tadhg Furlong front-row has been solid and – in tandem with James Ryan and Iain Henderson – can bring the kind of workrate and dynamism required, as can CJ Stander, whose industry typifies what this team is about.

Most of all, if Peter O’Mahony and Dan Leavy can achieve the understated accuracy they managed last week, Ireland will again control swathes of this game. Their cutting edge is just as sharp and in form as England’s dangerous outside backs.

Of course, much, as ever, hinges on the well-being of the hugely influential Conor Murray and Sexton, who are both primed to leave a lasting mark on this game and therefore more besides. For this would be some box ticked on the road to Japan 2019.

In the week that’s in it, this Irish squad have had their blinkers on. But they know what’s there for the winning. Watching Jordan Larmour and Kieran Marmion first to run onto the Twickenham turf yesterday and then the rest joined them, they all looked relaxed and in good spirits.

One senses this Irish team are primed to really go for it, that they’ve earned themselves a wonderful opportunity and rather than be fearful or fretful of it – as perhaps they were a week ago in a comparatively no-win penultimate leg at home to Scotland – can relish the occasion.

England have plenty of new combinations, or at any rate combinations who haven’t played together in a while, even that Saracens half-back pairing. No less than England will attempt to do with Sexton, so Ireland’s back-rowers and half-backs will endeavour to apply the heat on Wigglesworth and Farrell.

If Ireland do weather an early storm and establish a foothold in this game, they have every chance, especially with the impact off the bench, and given their confidence and conditioning.

This really could be the day of days. Maybe even the greatest day.