Six Nations 2019: All you need to know before round two 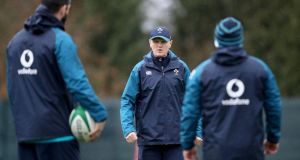 Joe Schmidt’s Ireland are looking to bounce back against Scotland in Edinburgh. Photograph: Dan Sheridan/Inpho

The 2019 Six Nations got off to a flying start last weekend, and already the championship looks fascinatingly poised.

There will be no Grand Slam for Ireland after their sobering defeat to England in Dublin, with Joe Schmidt’s men now needing to be word-perfect over the next five weeks in order to have any chance of defending their title.

Wales highlighted their championship credentials with a tight win over an imploding France, while a freewheeling Scotland got the job done before falling asleep at the death against Italy.

There’s no rest for the wicked, with all six sides heading straight into another fixture this weekend as things begin to take shape at the top of the table.

Here is all you need to know ahead of round two of the Six Nations.

Scotland currently hold top spot by the slimmest of margins - they have five points, four for the win and one bonus point, and a points difference of 13. England’s points difference of 12 relegates them to second, with Wales third on four points overall. The French are fourth on one point, Ireland fifth on zero with Italy propping up the table.

Ireland 20 England 32
A chastening start for the defending champions. England came to Dublin with a point to prove and caught Joe Schmidt’s side on the hop - outmuscling and outthinking the hosts en-route to a 32-20 bonus-point victory.

Eddie Jones’s side started like a steam train at the Aviva Stadium, with Jonny May crossing after 90 seconds - a score which had the returning Manu Tuilagi’s finger prints all over it.

Ireland responded through the boot of Johnny Sexton and a converted Cian Healy try but a Jacob Stockdale mistake let Elliot Daly in and the visitors had the initiative at the break. The game remained in the balance until the 65th minute and Henry Slade’s controversial try.

Ireland raged against the dying of the light but shipped another Slade score in the 75th. It was the first time England had scored more than one try in Dublin since 2003, blowing the championship wide open.

France 19 Wales 24
Regrets, they’ll have a few. The Six Nations began under the Stade de France lights last Friday, with France getting off to a flyer before conspiring to throw it all away against the Welsh.

On a sodden Parisian night, the hosts raced into a 16-0 half-time lead thanks to tries from Louis Picamoles and Yoann Huget.

Wales couldn’t get a foothold in the game, but they were gifted two scores after the break - Huget allowing Tomos Williams in before secondrow Sebastian Vahaamahina threw a wild pass for George North to intercept and touch down.

The momentum had shifted, and Warren Gatland brought Dan Biggar on to help steer the visitors home. Another North try sealed victory for Wales - their championship pursuit was on, France were left to wonder what might have been.

Scotland 33 Italy 20
From the sublime to the sluggish. Scotland made a steady start in their opener against Italy at Murrayfield, leaving plenty of chances behind them as they went into the break leading 12-3.

However Gregor Townsend’s side turned it on in the second-half, with the electric Blair Kinghorn completing his hat-trick as the hosts raced into a 33-3 lead.

It looked ominous for the Azzurri, but they rallied gamely in the last 10 minutes, scoring three tries as the Scots fell asleep.

A confidence-boosting finale for the Italians, perhaps a wake-up call for Scotland.

What are the Round Two fixtures?

Can I watch it?

Yes - every game of the 2019 Six Nations is free-to-air on Virgin Media One, the BBC and ITV. Virgin Media One show will show all three games this weekend, BBC One will show Ireland’s trip to Murrayfield and ITV will show England against France and Italy against Wales.

And, of course, you can follow every game with The Irish Times liveblog.

There were quite a few casualties from the opening weekend, with Ireland in particular suffering some frontline injuries.

Ireland
The cost of last Saturday’s defeat was high, with Joe Schmidt losing three of his first-choice XV for the trip to play Scotland. CJ Stander reportedly played 60 minutes against England with a fractured cheekbone and eye-socket and is out for four weeks, while Garry Ringrose picked up a hamstring injury.

Scotland
Two bodies have been added to Scotland’s extensive injury-list following their win over Italy, with flanker Sam Skinner returning to club side Exeter after picking up a first-half ankle injury.

Prop Murray McCallum has also been called into the squad for the Ireland game as cover for Willem Nel. Hooker Fraser Brown is back in full training after recovering from a knee injury.

England
England suffered a single casualty in the win over Ireland, but it was a major one - Maro Itoje limped off with a knee problem and is now likely to miss at least the France and Wales games.

Courtney Lawes or Joe Launchbury are set to replace him, while Joe Cokanasiga is also back to full fitness.

Wales
Warren Gatland has reported a clean bill of health - impressive after a physical encounter with a France side whose pack weighed a combined 150 stone.

He has taken a 31-man squad to a camp in Nice in a bid to recreate Rugby World Cup conditions, and is expected to make a number of changes - including giving Wasps’ Thomas Young a Six Nations debut.

France
Hooker Julien Marchand was injured against Wales and has been replaced in the French squad by Camille Chat.

Italy
Azzurri scrumhalf Tito Tebaldi pulled out of the Scotland defeat after injuring his back during the warm-up and was replaced by Guglielmo Palazzani. The 68-time capped Edoardo Gori has been called up to the squad.

Up fron, Zebre hooker Oliviero Fabiani has been ruled out, with uncapped 22-year-old Engjel Makelara replacing him.

Who are favourites to win the Championship now?

Unsurprisingly, England’s fine display in Dublin means they are now clear favourites with the bookies.

Murrayfield is a sell-out for the visit of Ireland, as is Twickenham for England against France.

If you find yourself in Rome on Saturday, however, you can attend Italy’s clash with Wales. Tickets for the Stadio Olimpico are priced from €30-€90 and can be purchased HERE.

Does anybody else think Ireland have peaked too early before Japan?

Topley and Willey named in England squad to take on Ireland 15:06
Former Waterford boss Alan Reynolds joins Ireland Under-21 set-up 13:09
Chris Froome to join Dan Martin at Israel Start-Up Nation 12:51
When Clare’s hurlers climbed Everest and won Munster in 1995 12:15
Rafael Nadal: A mental giant who plays every point as though it’s his last 10:59
Crossword Get access to over 6,000 interactive crosswords