Ireland know it won’t be as easy as ABC at Murrayfield, but they know what they need 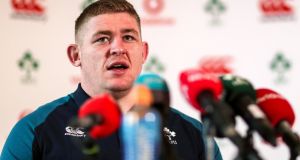 The Tuesday buzzword is “accuracy”. Irish prop Tadhg Furlong is dropping it like Minstrels at a chocoholic party. Dave Kilcoyne too. Then Irish scrum coach Greg Feek speaks about what Ireland need to get right against Scotland. It’s the “A” word again.

On the face of it that seems like a wise move. A step away from the more pejorative “bully”, which has hogged the conversations since England did a physical number on Ireland last Saturday. The Irish A-team of Furlong, Feek and Kilcoyne steer the conversation towards calmer water. This is where players can reclaim the tiller hand.

With a bully there is always a victim and that’s no good. Day three post-England, and Ireland are distancing themselves from victimhood, striking out and re-establishing authority. In that everyone is on-message. Bully, beaten up and bombarded are passé, and today those words are met with polite but terse answers. The “A” word fills the old drawing room in Carton House. So what went wrong?

“A little bit of accuracy on our part,” says Furlong. “England are a good team. They exploited the opportunities we gave them. So, I suppose if we get back to trying to be accurate and doing what we do. It isn’t easy to do it in Test match rugby but if we try to get back then we’re hopeful our performance can improve.

“I think there was a few truths,” he added after the video session. “But we’re not trying to slate players or anything like that. It’s just learning, really, isn’t it?”

Kilcoyne, who has not played in a Six Nations match since Italy in 2013, echoed his frontrow partner.

“We did a very good review in attack and D,” he explains, introducing defence. “It’s about getting better in those areas and making sure we are more accurate. Just generally. In the air, in our physical collisions, accurate in how we start, our plays.”

Furlong uses the “A” word 10 times in 10 minutes, Kilcoyne uses it three times and Feek twice.

Kilcoyne’s last Six Nations match before last week was coming off the bench for Cian Healy in 2013 as Ireland lost 22-15 to the Italians, Paddy Jackson scoring all of Ireland’s points from the tee. Ireland also lost to Scotland that year, Kilcoyne coming off the bench for Tom Court. But 2013 is not where anybody wants to park the conversation, especially “Killer”.

“It was a very tough day. It was a bad day for Irish rugby. Hopefully we will have better memories this week,” says the Munster prop. “ That’s the beauty of this group. We tend to look forward. It’s about getting a win in Scotland and taking it from there. It’s about fixing the wrongs from last week.”

Look, losing games is never nice but it doesn’t mean you throw it all away either

You might have liked to have heard the players whinge a little, declare they are travelling to Edinburgh with a horrible chip on their shoulder; that, wounded by England, they are baying for blood; that defeat to Scotland would obliterate the Six Nations as a launch pad for the World Cup and be enough to trigger an identity crisis.

Ireland are not wired like that. The voice of unhinged emotion has been removed and replaced by hours of attention to detail. The normally affable Furlong, with his Wexford accent and colloquialisms, could have sounded a tad tetchy. But his words are those of the coaches, even if inside he is crooking an itchy trigger finger. Hurt is a motivator, he agrees, but no reason to redecorate the whole house.

“Look, losing games is never nice but it doesn’t mean you throw it all away either and start changing things massively. But you don’t carry hurt with you into this weekend and try to do something you usually wouldn’t do. We just go back to what we do well.

“Motivation, work harder and get stuff nailed down. It doesn’t mean that we’ll go out absolutely banging our chests. You saw when we weren’t on our game two years ago what happened over there.”

“They’re strong,” says Furlong of Scotland. “They had a good November. The two provincial teams, Glasgow and Edinburgh, are going really well – in the quarter-finals of Europe.

“They’re really smart. I think the strike plays they use off lineout and scrum are really good. Some of the backs they have. Obviously, their set piece is good. Out the back of that, they have some really dangerous runners in the wider channels and obviously Finn Russell pulling the strings at 10.”

An accurate assessment. That word again.