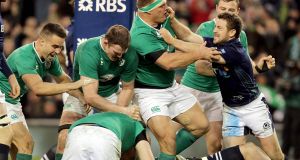 To England the Grand Slam spoils, to Ireland a second successive win at the Aviva Stadium, thus maintaining a three-year unbeaten home record in the Six Nations, and with it campaign-salvaging third-place finish. Saturday’s flawed if entertaining 35-25 win over a resurgent Scotland is assuredly not the standard required for Ireland to make history by winning in South Africa for the first time ever this June, much less the series itself.

But they will be stronger for what they have been through over the last two months.

Furthermore, aside from the possibility of having Sean O’Brien, Iain Henderson, Peter O’Mahony, Tommy Bowe, Marty Moore and others back in the frame, not the least comforting aspect of Andy Farrell assuming the role of Irish defence coach is that it will afford Joe Schmidt more time to focus on Ireland’s attacking game and planning for the Springboks.

This has been the most trying season Schmidt has endured in his six years back in Irish rugby. No less than the previous title-winning years, the 2016 Six Nations merely underlined how small the margins are.

“I enjoyed it,” he maintained when reflecting on the campaign. “It’s funny, the players kept their enthusiasm. It was evident, hopefully, to people outside, the support we sensed externally and people who would turn up outside the training venue and turn up and support us outside the team hotel before matches and even the amount of people we sensed were in the ground at Twickenham – they were still giving us a chance even though we’d had a draw and a loss.”

“They said ‘hey, this team has a chance’. We showed that we had a chance and were one try that didn’t get awarded away from a close, tight finish there and they’re a super team.

“Stuart Lancaster has built a really good group there and Eddie Jones has kicked them on and they were always going to win a Six Nations at some stage. They were so close in the last two years.-”

Family circumstances will be uppermost in swaying Schmidt to sign another extension to his contract or not. Conceivably, an offer from the Lions could steer him toward seeing out this new World Cup cycle with Ireland, although he played that down.

“For me, one of the things is that I’ve never, ever set, I think, a goal in my life. I’ve never really tried to do anything than just try to work away with an eye to the future in the development of players, but not certainly in the direction I go.”

“The one thing that I would say is that it’s been an absolute honour to work with them and whatever happens beyond June 2017 will be dictated less by any rugby objectives I have or any appreciation I have of the role I’ve been quite honoured to have for the last two and a half years.”

With that daunting three-Test series against the Springboks to round off a record 17-Test season, it may be a blessing to a degree that Leinster, Munster and Ulster will be idle on European weekends.

Schmidt said those weeks could be used to have one-on-one post-Six Nations debriefs with the players, although he added: “That’s the closest thing we can get to Test preparation. That’s the closest thing a player coming through the system can get as a stepping stone to full Test match rugby because there is a difference. Hopefully, there will be a bounce-back next year.”

That said, Connacht host Leinster at the Sportsground next Saturday in what is the first of five interpro derbies in the Guinness Pro12 run-in, with the prospect of more to come in the play-offs.

“The derby games have a real edge to them and when you match up who is going to be playing, that Connacht-Leinster next week is going to be a humdinger,” said Schmidt, who, true to form, will probably eschew the break or holiday he himself could patently do with.

“I’m looking forward to the game. In the midfield you may well have a Robbie Henshaw and a Garry Ringrose in amongst a Ben Te’o and a Bundee Aki potentially. And you may well see a Matt Healy come up against a Dave Kearney. is it’s never a perfect world, so whatever you want to be the case is seldom the case entirely, so you’ve got to mix and match as best you can.”

“We’ll sign out tomorrow,” said Rory Best, or maybe the day after, “and look forward to knocking lumps out of each other for two months.”

“We’ve now won two games and we can go to South Africa and try to create history by winning Test matches over there. It’s been really enjoyable this Six Nations, and I suppose I’ll just wait and see if the old body holds up,” said the skipper a little intriguingly.

1 Tiger shines and Brady bites back as charity match proves an enjoyable release
2 The Offload: Philip Browne’s grave outlook should be taken seriously
3 Ken Early: Liverpool fans, Bamber Gascoigne and a close shave in Istanbul
4 As news gets better, can the pull of The Field be resisted?
5 Sideline Cut: Vignette shows why Bird is the true shark in The Last Dance
Real news has value SUBSCRIBE