Saracens centre Nick Tompkins to start for Wales against Ireland 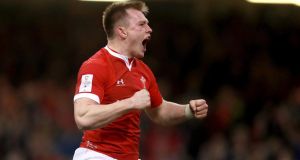 Nick Tompkins will start for Wales against Ireland on Saturday. Photograph: Adam Davy/PA

Kick-off: 2.15pm, Saturday. Venue: Aviva Stadium. How to follow: The Irish Times liveblog will begin at 1.45pm . On TV: Live on Virgin Media One and ITV.

Nick Tompkins will make his first start for Wales against Ireland in Dublin on Saturday after making a try-scoring Test debut from the bench last weekend.

The Saracens centre scored the third of Wales’s five tries in the 42-0 victory over Italy in Cardiff and was involved in their opener when he was on as a temporary replacement in the first half having won a turnover penalty.

He will play at outside-centre in place of George North who moves to the wing at the expense of Johnny McNicholl, Wales’s other debutant last weekend who is sacrificed because with Tompkins in the midfield Wales want North’s experience.

“I thought Nick played exceptionally well on Saturday and he deserves to start,” said the Wales head coach, Wayne Pivac, who decided not to tinker with the front row despite issues in the scrum against Italy. “George also played really well and he will move back to the wing. It was nice to get off to a winning start. Momentum is important in the Six Nations and we need to build on that going forward.”

Pivac has made four changes on the bench. Rhys Carre, who was unavailable through suspension last weekend, covers loose-head prop and the fit again Gareth Davies is the scrum-half alternative at the expense of Rhys Webb. Gloucester’s Owen Williams will cover outside-half and centre after coming in for Jarrod Evans while McNicholl takes Tompkins’s place among the replacements.

It will be the first real test for Pivac since he replaced Warren Gatland after last year’s World Cup. Wales have not won in the Six Nations in Dublin since 2012, although they secured a draw there four years ago. They were leaving for the Irish capital on Thursday afternoon.

1 ‘For 25 minutes I ran out of oxygen’: Pepe Reina on his coronavirus battle
2 Rory McIlroy admits Portrush nightmare was catalyst for his return to the top
3 Garry Ringrose to stay with Leinster as he signs two-year central contract
4 ‘This is sick’ - seventh-tier Swedish club cancels friendly after betting mayhem
5 Sky Sports customers set to save on bills until Premier League returns
Real news has value SUBSCRIBE