Ireland eye up No 1 ranking with Twickenham win 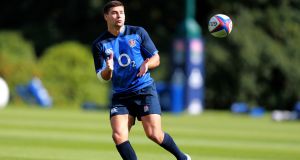 The England scrumhalf Ben Youngs has dismissed the significance of the world No 1 ranking after it emerged Ireland will leapfrog Wales at the summit if they win at Twickenham on Saturday.

Last weekend Wales went above New Zealand to claim the No 1 spot for the first time in their history and any win for Ireland will see Joe Schmidt’s side do the same.

England could have taken top spot last weekend with a sizeable victory in Cardiff but now sit in fifth place and the highest they can go on Saturday is third. But Youngs claimed England do not use the world rankings as a gauge of their progress, even if reaching No 1 was chief among Eddie Jones’s stated aims when installed as head coach.

Youngs said: “I didn’t know [Ireland going top] can happen. You concentrate on yourselves, you know where you are. If you have got good momentum, and the team is confident you don’t need the rankings to tell us where we are as a team.”

Ireland were victorious on their last trip to Twickenham, clinching the Six Nations Grand Slam in 2018 with a comfortable 24-15 win. England were even more emphatic victors in Dublin this year, however, with Jonny May’s second-minute try putting them on the way to a 32-20 win. That try was memorable for England’s lineout move – Jamie George going over the top to an onrushing Manu Tuilagi, who, starting his first Test in five years, made a considerable dent in the Ireland defence.

Tuilagi starts on Saturday for the first time in this warm-up series, outside George Ford and Owen Farrell who rekindle their 10-12 partnership and Youngs confirmed England will be looking to get his Leicester team-mate involved from the word go again.

“Manu had looked great,” Youngs said. “He’s probably in the best physical shape I’ve ever seen him. He’s certainly in a great head-space, loving every minute of being here, which is fantastic. He’s always happy, he’s buzzing around the place. He’s constantly enthusiastic and that rubs off on guys. We saw glimpses of it in the first two games, particularly the first Wales game with his carry, so we’ll try to get him into the game early tomorrow.

“We’ve scored a fair few tries in training. We’re excited about the talent we have out there. When you have George and Owen together, their distribution skills and the way they can manipulate defenders will give up opportunities for Manu, Jonny and others. I’m very familiar of playing with both George and Owen. We’ll be able to attack a bit more.”