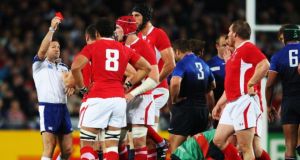 One of the things which makes the World Cup such an incredibly hard tournament to win is in order to do so a team needs to hit its peak at exactly the right moment.

The winners need to be at their absolute best for one six week period during a four-year cycle, and getting the timing right is impossibly difficult.

Granted, this may not be the case for teams such as the All Blacks, who remain one of the best around during their troughs and unbeatble at their peaks, but for a side such as Wales timing has proved to be one of their downfalls at the World Cup.

Having emerged from a grim period Wales roared to Six Nations success in 2005, their first since 1994, but by the time the next World Cup came around in 2007 their Grand Slam winning side has passed the peak of its powers.

In 2011 however, Warren Gatland’s side seemed to be hitting their stride at just the right time - indeed, after the tournament they would win back-to-back Six Nations. They manouvered their way out of Pool D with minimal fuss - an agonising loss to South Africa the only blemish.

Ireland were dispatched comfortably in the quarter-finals, setting up a semi-final date with France.

This was supposed to be Wales’ moment, but it didn’t go to plan.

Just 18 minutes in captain Sam Warburton, the country’s talisman and one of the globe’s finest backrows, met Vincent Clerc with a huge hit off the back of a lineout.

After a brief melee calm was restored and television cameras showed Warburton sat on the bench, presumably for his 10 minutes in the sin bin. But slowly it dawned; referee Alain Rolland had actually sent Warburton off.

The crowd were incredulous, so too the commentators.

Replays showed Warburton had lost control of Clerc as he went to put him down. By the letter of the law, perhaps it was the right decision. But Rolland failed to referee with any human instinct when it was needed most.