Outhalf Johnny Sexton to lead side in Kobe; Jordi Murphy straight into the side 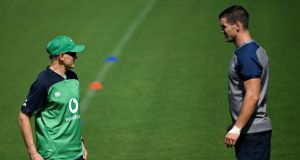 Ireland have made 11 changes in their starting XV to face Russia this Thursday in Kobe (kick-off 7.15pm local time/11.15am Irish time), with just four players from the run-on team in the 19-12 defeat by Japan being required to play again five days later.

As expected, talismanic World Player of the Year Johnny Sexton is one of the 11 players restored to the team after missing last Saturday’s defeat with the quad strain which prevented him from continuing with the place-kicking responsibilities in the opening win over Scotland.

In many ways the de facto captain, in actual fact it will also be the first time that the 34-year-old Sexton captains Ireland in his 86th cap for his country.

“It’s a massive honour,” said Sexton. “I spoke to Joe this morning so I’ve only had a few hours to think about it. I haven’t even told my family yet but I’m sure they’ll be proud. It’s something I’ve thought about as a kid. I made a lot of decisions towards this. It’s taken a while and it’s been worth the wait but I want to be captain of a good performance and a World Cup win.”

The fit-again Bundee Aki and Andrew Conway, a try-scorer against Scotland, also return to the back-line, with Luke McGrath renewing his Leinster halfback partnership with Sexton after being confined to two replacement appearances to date, the second on the left wing against Japan.

Up front, Dave Kilcoyne, Niall Scannell and, in his first appearance of the World Cup, John Ryan form a new front-row, and likewise Jean Kleyn makes his World Cup debut in a new second-row combination, while Jordi Murphy is pitched straight into the backrow after joining the squad yesterday, with Rhys Ruddock also starting.

The four retained include Peter O’Mahony, who has had less game time than CJ Stander and Josh van der Flier, after being replaced in both games. For Rob Kearney and Keith Earls, it will be back-to-back starts after missing the Scottish game, with Earls switching to the left wing.

With Chris Farrell ruled out due to concussion, as Aki had been against Japan, and the hamstrung Robbie Henshaw being held back for the Samoan game, by far the biggest load of any player in the entire 31-man squad has been placed on Garry Ringrose.

“It’s a risk but he’s feeling great,” admitted Schmidt. “It’s a fairly tough situation but sometimes Robbie is on the cusp of being available but that would be a risk we don’t feel we need to make because Garry is feeling great.”

The centre’s return to form has been one of the few positives from both of the first two games. However, this will not only be his third successive start in 16 days after putting in two big 80 minute performances to date, but also his sixth successive game, after playing in all four warm-up games, beginning with 80 minute stints against both Italy and England and two half-hour shifts off the bench in the wins over Wales.

If the 24-year-old can hopefully come through what is likely to be another bruising encounter in ever more humid and warmer conditions than the opening two games, then no player will be due more of a rest against Samoa nine days later than Ringrose.

With only five backrowers, there was always going to be some strain on the loose forwards as well and CJ Stander, who has already put together two big 80 minute efforts inside a seven-day period, will be on the bench. Only the remarkable James Ryan has more than Stander’s 31 tackles (none missed) or his tally of carries (26) and metres (60).

Ryan thus earns a rest, with Iain Hendeerson covering the secondrow. The frontrow replacements will be Andrew Porter, Sean Cronin and Tadhg Furlong. The most eye-catching selection amongst the replacements will see Joey Carbery cover scrumhalf, with Jack Carty and Jordan Larmour completing the bench.

Reflecting on the internal post-mortem into the defeat by Japan, Stander said: “It’s one of those games we know we could have done better. Joe just pointed out what we left out there, points-wise, and what we could have done better as individuals. He has been Joe. He has been supporting the squad. He wants us to be the best we can be so he has pointed out what we can do better and, on the other side, supporting us – arms around a few lads and he’s been harsh to a few boys. That’s just how we work here. We take what we get and we give what we can give.”

Stander said he fell into both categories.

“I’ve got both sides, not really to that extent, it’s just what I could have done better at a few stages and again he just wants to make sure that we recover well because it’s a short turnaround. Five days in international rugby is massive so he wants us to be energised and physically ready on Thursday.”

The Irish squad had a day off In Kobe today, with Stander one of many who opted for the queues in the nearby Universal Studies. Others chose the trek to the less crowded Kyoto, while Cian Healy, try to type, did his own thing after arranging to see a master knife maker at work in his workshop.

For the second time in this World Cup, a planned open Irish training session was closed, further limiting their contact with the public at large.

The Irish squad’s one training session in readiness for Thursday’s game, against the Kobelco Steelers (who will not have Dan Carter training) in their Japanese club’s home ground today, was to have been open to the public.

However the session will now be closed, it is claimed due to a lack of support from the World Cup organizers, JR19, although they were unavailable for comment. Instead, 100 kids were invited along to the end of today’s session

It is the second time Ireland have closed what was to have been an open training session, having also done so in their first week in camp in Chiba due to the forecast for heavy rains.