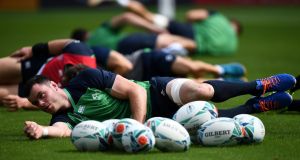 For the second time in this World Cup, a planned open Irish training session has been closed, further limiting their contact with the public at large.

The Irish squad’s one training session in readiness for Thursday’s game against Russia, against the Kobelco Steelers (who will not have Dan Carter training) in their Japanese club’s home ground on Tuesday, was to have been open to the public.

However, the session will now be closed, it is claimed due to a lack of support from the World Cup organisers, JR19, although they were unavailable for comment. The IRFU has announced that some local schoolchildren will attend the session.

It is the second time Ireland have closed what was to have been an open training session, having also done so in their first week in camp in Chiba due to the forecast for heavy rains.

Ireland’s team for the game against Russia will be named at 3pm local time in Kobe (7am Irish time) on Tuesday morning.