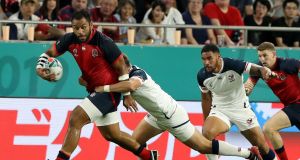 “Men don’t like to talk about their feelings,” Billy Vunipola argues, resting his gargantuan, 20-stone frame on his knees as he sits in sandals and shorts and talks about the England mindset as they gear up for Saturday’s humdinger against Argentina.

The sight of Vunipola charging at a compressed defence, ball tucked under arm, has become one of the more formidable sights in contemporary rugby. Even in this relaxed environment, leaning forward and speaking softly about his aspirations for this World Cup, he is an impressive athlete. Vunipola is a contradiction: a teak-tough Tongan-born enforcer, at once ultra-confident and vulnerable and unusually expressive for a rugby player with a Polynesian background.

As he speaks, Joe Marler saunters by, baseball cap on backwards and gives Vunipola a knowing shake of the head as he sits with his audience explaining how and why Eddie Jones has pushed his squad into reaching a kind of core knowledge as a group. In public, Jones has given blokeish insights about getting his players to enjoy a few brews together. Last week, they sat down to enjoy a famed Kobe steak dinner.

“It is a bit deeper than that,” Vunipola says now. “This is the first team willing to go deeper than saying, you know, you should have hit this ruck or whatever. We’ve got down to it. And it’s been good. Eddie will always look for areas to improve. And that was the biggest thing: how together we can be. It’s very clichéd. Every team says that they are doing it. But being brutally honest can hurt a few feelings.

“You know, being in the confines of England rugby . . . a lot of us are very precious. Because when you with your club, you’re the main man. But with England, you are just the next person. So there’s been a few handbags thrown around. But it’s been really good. We are on a different level to any other England team that I have been involved in anyway.”

He has been a staple on England rugby teams since 2013. Few players have had such an exotic entry to the sometimes rarefied world of elite rugby union. He was just seven when he flew with his mother from Tonga to Heathrow, landing on a January morning in 1999. He had never seen frost before and pretended his cold breath was cigarette smoke. His father was waiting at Heathrow and drove the family to Pontypool, where he was playing professional rugby as a hooker.

Within seven years, Billy’s prodigious size and potential led to a scholarship a boarding scholarship at Harrow. Even as a teenager, he was one of the big figures within England rugby and absorbed much of the national disappointment in 2015 when the team got stage fright and bombed out of its own tournament. Righting what he feels was a wrong is part of his motivation here in Japan.

“Yeah. Yeah. That is still pretty vivid in my mind. Not something I enjoyed or want to do again. We have talked a lot about it but talking is different than doing. For me personally, what drives me a lot is doubt. From people doubting my personal abilities but also the team. Because we are in a team environment and what people say about the team can either affect you and make you crumble or help you to prove everyone wrong. 2015 was massive because we went in with massive expectations and we didn’t deliver. We have been quieter coming in to this tournament. We have been hurt before and don’t want to be like that again.”

Over the past two years, Vunipola has been through the wringer. He lost two full years through a litany of shoulder and knee injuries and then broke both arms – his right forearm twice – on different occasions. He returned in January not quite as a forgotten man but as someone with a lot to prove. In April, his liking of Israel Folau’s homophobic tweet put him in an awkward spotlight and he was booed in a subsequent European club semi-final for Saracens against Munster.

Vunipola references faith and family a lot and says that Jones has pushed the England squad to learn to be more like a family, squabbles and all. Psychologist Pippa Grange was brought on to the coaching staff after the 38-38 draw against Scotland this spring and Jones has encouraged them to lay everything on the table.

“He has definitely got the baggage out. I would like to keep it within the team. It was something that was very important to us. It is something that has freed us up a lot in terms of our relationships. Obviously there were a few bumps in the road. But like anything with families, there are always mishaps. I think we had better tools to deal with it this year than before. And also I guess just listening to each other and caring about the next person’s opinion rather than just going up to your room and having a little moan to your mate. Everything that we feel or think: just put it out into the group.”

All of this is fine as long as England keep on winning. Argentina are a volatile and unknowable force and if England win, they have seven days to prepare for a thunderous clash against France in Yokohama. Jones’s way to prime Vunipola has been to give him all the minutes he can. In contrast, the other Vunipola, loosehead Mako, is itching to get his chance on the field and is tipped for a return against Argentina.

Vunipola laughs when asked how his brother is feeling.

“He is exactly the same as what I said,” he laughs. “We probably communicate through our partners. You’d probably have to ask my wife how he is because he doesn’t tell me. And his mood is always the same . . . whether he is happy or sad; his face is always the same. He knows he has to fight to get back into the team. I knew the same thing when I was coming back. We are all competing but looking after each other at the same time.”