‘These are not meant to be ironman competitions, but they’re turning into that’ 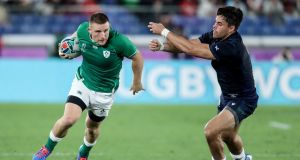 “When you’re in a team environment, there’s a physical toll but there is a mental toll as well,” said McDermott, the former Ireland under-21 coach.

“If you look at us, we faded away considerably in the second half against Samoa [after three rest days]. Uruguay yesterday were blown away by Georgia. Fiji, even though they made their changes, lost to Uruguay.

“I’ve huge experience of this from my time with the Ireland 21s at World Cups –- I was involved in four or five of them – and they had five matches in 16 days. Every match was a four day turnaround!”

In Irish rugby circles, McDermott is most famous for coaching Jamie Heaslip’s age grade to the 2004 World Cup final in Scotland.

World Rugby have resisted requests by coaches, including Eddie Jones and Joe Schmidt, to extend the tournament to more than 43 days.

Hosts Japan have eight, seven and eight-day turnarounds with the least road to cover during the Pool stages (635km). while other tier two nations, the USA and Fiji, are not so fortunate.

“These are not meant to be ironman competitions, but they’re turning into that,” said McDermott. “It’s not a case that the tier two teams are treated differently, Ireland have a five-day turnaround to this game, England had a short turnaround from their first game but the difference is they have bigger squads to manage the situation better.”

The US Eagles have been dealt a horrible hand with only 14 rest days – the least time between matches alongside South Africa and Canada – while having to trek a total of 2,250km, from Kobe to Fukuoka in the five days between playing England and France tomorrow (Wednesday), before facing Argentina in Kumagaya and Tonga in Higashiosaka, which is 544km travel during a three-day turnaround.

“I don’t know how, from a commercial point of view, you make it viable but there is a certain minimum rest that should be instilled into these competitions,” McDermott added. “You talk about player welfare! It’s just unrealistic and you take away from the competition.”

McDermott’s nephew Andrew Conway is expected to come back into the Ireland squad that faces Russia in Kobe’s sweltering Misaki Stadium on Thursday.

“I’m his uncle, yeah,” said the former Munster hooker, speaking from Russia’s base outside the beach town of Oiso. “He got his fast twitch fibres from me. My sister’s son. And on the Irish Sevens circuit Terry Kennedy is my nephew as well. My other sister is his mom.

“It’s funny, when Andrew left ’Rock in 2009 he was underage again for schools and both the Munster and Leinster Academies were out for him at that stage.

“He actually wanted to go to Munster, it wasn’t down to me, but there was an affiliation because I played there.”

In the 1990s McDermott switched from Blackrock to Shannon, and from Leinster to Munster, as future Lions hooker Shane Byrne was number one choice in Dublin.

“But, because Andrew was young his mom and dad, Laura and Stephen, preferred him to hang around at home and ultimately that’s how that happened. It’s kind of funny when you monitor a guy’s career, he was one of those schoolboy heroes you were waiting to break through and in Leinster it sporadically happens.

“The journey through Munster has worked out really well for him. Everyone knew his attacking ability, but there were question marks over his defence and his high ball ability but he is one of the best in the business now.

“That’s a real commendation to him and the people who are looking after him. It’s a good success story. How many guys have we known over the years with buckets of talent, but they don’t kick on?”

On Ireland’s 19-12 defeat to Japan in Shizuoka, McDermott said: “It’s kind of hard to believe that Ireland found themselves in this position. I watched that second half against Japan in disbelief and, obviously, I know Japan. We’ve studied them for a year and know what they’re capable of but I didn’t see that level of performance coming from them.

“A worrying aspect from an Irish context was that when they were under pressure in that second half that they weren’t able to unravel their way out of that pressure.

“I don’t know Joe Schmidt personally, I’d imagine he’d a plan coming into this competition. Injuries have probably altered a few things, but I don’t think he’s going to deviate hugely from his plan.

“I still believe he’ll see them as a quarter-final team. Johnny Sexton will want to get on the pitch to play and steady the ship. It will be an interesting experience for our guys anyway.”

Athletics Ireland confirm nine sessions for National Championships 18:02
Trump prefers Jordan to James because ‘he wasn’t political’ 16:45
Mark Selby books semi-final spot after crisis of confidence 13:09
Galgorm Castle resort could rescue 2020 Irish Open 11:25
Iain Henderson out for up to 10 weeks after hip surgery 10:26
Crossword Get access to over 6,000 interactive crosswords