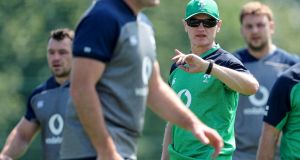 Joe Schmidt’s Ireland are looking to bounce back against Russia on Thursday. Photograph: Dan Sheridan/Inpho

It was all going so well. Ireland’s Rugby World Cup campaign had got off to the perfect start, as they hammered Scotland 27-3 in Yokohama - a fixture which was supposed to be their trickiest assignment of the pool stages.

Joe Schmidt’s side went into their second Pool A match against Japan full of confidence, with the tournament hosts seemingly unlikely to provide serious resistance in Shizuoka.

However, that script was quickly torn up on Saturday morning. In the muggy heat of the Ecopa Stadium, the tourists were ripped to shreds by the Brave Blossoms.

Jamie Joseph’s side were hungry and clinical against Ireland. They stuck to their guns and played vibrant, attacking rugby, while also more than matching their Tier One opponents physically.

Ireland’s frontline ball carriers - even the likes of James Ryan and Iain Henderson - had minimal impact in the face of their inspired hosts, who out-thought and out-fought Schmidt’s side throughout.

And so it’s back to the drawing board for the Irish. There are two pool fixtures remaining, and two bonus-point victories will guarantee them a place in the quarter-finals.

First up, it’s a date with Russia in Kobe City. On paper, it’s Ireland’s easiest fixture of the pools. However, if they have learned anything from their defeat in Shizuoka, they won’t be taken anything forgranted.

Here is everything you need to know, as Ireland bid to get their Rugby World Cup campaign back on track.

Ireland’s third Pool A fixture of the Rugby World Cup, against Russia at the Kobe Misaki Stadium, Kobe.

This will be Ireland’s first and only fixture which doesn’t take place on the weekend, making it harder to follow for anyone who’s at work and doesn’t fancy trying to skive off.

So, we are here to help - you can keep up with all of the action throughout the morning and afternoon with the Irish Times liveblog, which will be live from around 10.30am on Thursday morning.

Ireland’s opening 27-3 win over Scotland means they are still in a decent position in Pool A, despite their 19-12 defeat to Japan next time out. Two bonus point victories are paramout to their hopes of topping the pool however, while a positive performance will be vital in easing the phsychological scars of Shizuoka.

Russia meanwhile have lost both of their matches thus far, but they have more than held their own. They really tested Japan on the opening day of the tournament - losing 30-10 - before making Samoa work for their 34-9 win in Kumagaya. The Bears had just a four-day turnaround between those fixtures - some of the cruellest scheduling in the whole tournament.

Ireland’s defeat to Japan is certainly damaging but it’s far from terminal, with two bonus points wins guaranteeing Schmidt’s side a place in the quarter-finals.

They are currently on six points - thanks to their win over Scotland and losing bonus point gained against Japan - and can still collect another 10 points across their final two fixtures.

Scotland's 34-0 win over Samoa on Monday morning has put them firmy back in the mix, but they can still only collect a maximum of 15 points - providing they beat Russia and Japan with bonus points. Japan currently sit on nine points from two matches, and can still collect up to 19.

The final fixture of the pool stages, between Scotland and Japan, is beginning to look like a straight shootout. There is the chance Gregor Townsend's Scots could pick up two bonus-point victories but finish behind Japan, if the Brave Blossoms beat Russia with a bonus-point and then earn two losing bonus points against Scotland (one for scoring four tries, one for losing by seven points of fewer).

If teams finish level, they will be separated on head-to-head record rather than overall points difference. This puts Ireland at a disadvantage if they finish on the same points as Japan but gives them the upper hand on Scotland. You can find the full permutations HERE.

Back to the All Blacks?

The pendulum has swung again, meaning Ireland are once again on course to finish second in the pool and meet the All Blacks in the last-eight - a prospect neither side will be too thrilled about.

Joe Schmidt has made 11 changes to the side that lost to Scotland for the clash with Scotland, with Johnny Sexton returning at outhalf and as captain after missing the game in Shizuoka.

Seven of those changes are in the pack, with just Peter O'Mahony remaining in the starting XV.  Jordi Murphy goes straight into the backrow at number eight after arriving in Japan on Monday to replace Jack Conan.

Lyn Jones’s Russia side has also been announced - he's made nine changes, after promising every player in his squad will get some playing time in Japan. Yury Kushnarev, the country's record test caps holder and their all-time leading points scorer, has not been included in the 23.

Ireland and Russia have met just twice. The first came in September 2002, in a qualifier match for the 2003 Rugby World Cup in Australia. Ireland won that one 35-0 in Krasnoyarsk.

The second meeting came in the pool stages of the 2011 Rugby World Cup in Rotorua - Ireland ran in nine tries in a dominant 62-12 win. They’ll be hoping for more of the same on Thursday.

Johnny Sexton’s absence against Japan was keenly felt, with Jack Carty starting brightly beore fading along with the rest of his teammmates as the Brave Blossoms flourished in Shizuoka.

But their talisman has looked for the positives in defeat - suggesting it’s better to have been beaten now rather than down the line in the knockout stages.

He said on Sunday: “I suppose the only blessing in disguise is that, in the last two World Cups that I’ve been involved in, we’ve not cruised through the group, but we’ve had everything go our way in the pool stages. And then we’ve had the day that we had yesterday [on Saturday] in a quarter-final and we’d be going home today.

“The great thing now is that we’ve got the rest of the pool to get things together. We know, to a certain extent, that we’ve got things in our own hands in terms of if we can win the last two games and score a number of tries we can definitely qualify for the quarter-final.

Thursday’s referee is France’s Jerome Garces. His assistants are Mathieu Raynal and Brendon Pickerill, with Ben Skeen the TMO.

After coping admirably with Typhoon Tapah in Yokohama before slogging away in humid conditions in Shizuoka, Ireland have seen it all since they got to Japan. They can expect high humidity again in Kobe, with temperatures of 25 degress and rain forecast for Thursday.

What are you worried about? Ireland only need to win five games to lift the World Cup. . .