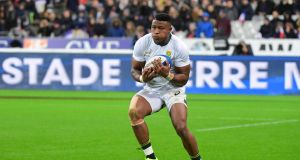 The 1995 World Cup final was on television in the Springboks hotel next door to Disneyland.

Two thoughts resonated from seeing a replay of this epic game forever famous outside the confines of sport due to Nelson Mandela’s presence.

Firstly, most of the players wouldn’t look out of place in today’s heavyweight collisions; especially Kobus Wiese, Os du Randt and the Brooke brothers, alongside Francois Pienaar and Sean Fitzpatrick, each man bringing professional physicality to the last ever amateur tournament.

Secondly, it’s jarring to realise that five men who played that day have prematurely passed away. Jonah Lomu died in 2015 from a heart attack linked to a kidney disease while tragedy has hounded South Africa’s starting XV with Chester Williams and James Small both suffering fatal heart attacks this year, flanker Ruben Kruger died from brain cancer, age 39, in 2010 and legendary scrumhalf Joost van der Weisthuizen succumbed to the effects of motor neuron disease in 2017.

Four of the Springboks most iconic team gone before their mid-40s.

Other South African players from this era – Tinus Linee (motor neuron disease in 2014) and Wium Basson (liver cancer in 2001) – are also dead while Andre Venter has been a paraplegic since 2006 after being struck down with degenerative syndrome of the central nervous system known as transverse myelitis.

With these unconnected tragedies rumbling around the mind, we sat into the daily media briefing with the Springboks scrum coach and former Scotland prop Matthew Proudfoot.

After a few questions about forwards losing weight in training due to the hot weather, Eoin Sheahan from Off The Ball asked if rugby and South African rugby in particular has a doping problem.

“I’m a forwards coach mate,” Proudfoot replied. “This is something for administrators to answer. I wouldn’t have the information to answer that question.”

Concerned at all about the image of South African rugby?

“I think the image of South African rugby is portrayed by what you see on the field,” said Proudfoot. “We are a competitive nation.

“From a sports spectator point of view, of course doping in sport is something that continually needs to be addressed – not just rugby – on a worldwide platform. To talk about it from an assistant coaching position, I don’t think it is my role.”

A South African journalist followed up with more a suggestion than question that elite players are regularly tested.

World Rugby stated at Monday’s media briefing that tests will happen at squad bases without warning throughout the tournament.

“In the last year all the teams have been visited several times out of competition and in competition,” said Mike Earl, World Rugby’s anti doping general manager. “All the players have been subjected to a comprehensive programme in the weeks of the tournament which isn’t when we consider the highest risk to be of players doping.

“That doesn’t mean there couldn’t be a case during the tournament. It’s very difficult for me to put any figure on risk. Overall, at the elite level, the average over the last four years has been 0.4 per cent of [positive test] findings.

“We don’t think there is a significant problem at the elite level, statistically,” Earl added, “but we are not complacent so we will make sure matches and out of competition will see players tested.”

South Africa head coach Rassie Erasmus stated that Dyantyi, the 2018 world breakthrough player of the year, who continues to claim his innocence, was not considered for the World Cup squad due to injury and not this summer’s positive test.

It was suggested to Proudfoot that recent adverse findings prove that testing is working at both local and international level.

“It has to be working...It’s been proven in athletics with the Russian Federation that testing is the only mechanism for clean sport.”

Incidentally, the Russian team that faces Japan in Friday’s opening game of the tournament at Tokyo stadium did much of their World Cup preparation in Sochi, the venue for the 2014 Winter Olympic Games. In 2016 the McLaren report, commissioned by the World Anti-Doping Agency, concluded that Russia employed a state sponsored doping programme and subsequent cover up surrounding those Olympics.

“People might be a bit dubious about that but when we were in camp in December there was a full day spent with [Russia’s internal anti-doping body] when every member of the squad was tested,” said Mark McDermott, Russia’s assistant coach, in an interview with The Irish Times earlier this year. “I don’t think it would bode well for Russia if there was another sport highlighted [for doping] so they are diligent. They don’t want any shame put on them as a nation.

“Players would have serious bans if there is any traces [of banned substances],” said McDermott, who coached the Ireland under-21s to a World Cup final in 2004. “All the players on display for Russia during the World Cup are full time professional rugby players so those guys wouldn’t want to lose their livelihood because they don’t have much else to be honest with you. The salaries I imagine are not as competitive as in mainstream Europe. There is a strict protocol taken on it.”

After five questions on doping at Tuesday’s Springbok media gathering, a journalist changed the narrative back to scrummaging and the small matter of facing New Zealand on Saturday night, in a repeat of that 1995 World Cup final.