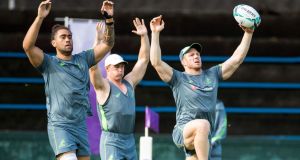 Australia captain Michael Hooper is relishing the opportunity to link up with David Pocock for the Wallabies’ Rugby World Cup opener against Fiji on Saturday.

Coach Michael Cheika has selected the experienced pair in his backrow for the match in Sapporo, as they kick off a campaign that will also see them take on Wales, Georgia and Uruguay in Pool D.

The inclusion of Pocock at blindside at the expense of Lukhan Salakaia-Loto is the only variation from the team that started last month’s impressive 47-26 victory over New Zealand in Perth.

The duo will be joined in the backrow by number eight Isi Naisarani – one of three Fiji-born starters in the Australia XV.

“I am a fan of his [Pocock’s] work on the field, his ability to go over the ball, coupled with Isi – he can get over the ball too and he has got a great attacking game and some good defence work too,” said Hooper, who also started alongside Pocock in the 2015 final.

“We have been looking at this game for a while now. Certain players in their team have been highlighted within that.

“A lot of guys have had some good time in Europe playing and we are very aware of the threats these guys have across the park – a big forward pack, they are fast, fit, athletic men.

“We are definitely ready for what they have to offer.”

Cheika previously commented that unpredictability would be a theme running through the Wallabies’ World Cup challenge, but Fiji counterpart John McKee believes his side are capable of handling the Australian game plan.

“Michael Cheika might think his team is unpredictable – I like to think we have got some unpredictability about us as well, with the type of players we have got with our outside backs, and among our forwards as well, who can run into open space and offload and pass,” he said.

“They are going to want to play quite an up-tempo game. They will probably keep their kicking to a minimum and hope that they can get some dominance as they did in Perth.

“For us, that type of game can suit us as well. Defence is going to be a big aspect in the game.”

Three members of the Fiji XV were part of the Sevens side who won gold at the 2016 Olympic Games – Leone Nakarawa, Viliame Mata and Josua Tuisova.