Bundee Aki: ‘As a kid you dream of being at these world stages’ 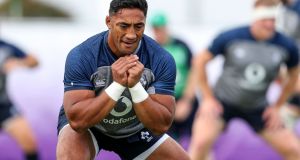 Ireland’s Bundee Aki in training in Tokyo. The centre has started 20 of the team’s last 24 matches. Photograph: Dan Sheridan/Inpho

Here we go again. Some of the Little Irelanders out there apparently still feel that Irish-born players should be preferred to those, such as Bundee Aki, who have qualified by residency. Yawn.

Of course, the complainants are perfectly entitled to their opinions, as Aki is the first to admit, but the notion that, say, Chris Farrell and Garry Ringrose should be preferred in Ireland’s midfield for this Sunday’s monumental meeting with Scotland on the basis of their birthplace is plainly ludicrous.

If ever a team should be picked on merit and form, and from all those eligible, it is this one.

It’s also worth noting that the three-year residency ruling will be extended to five years in January, but even if such a law had applied in time for this World Cup, Aki would be eligible as this will be his sixth season playing for Connacht.

“When I first came over my ambition was to play at an international level, but obviously it’s never a given. It was such a hard decision to move over with my family but Ireland has welcomed me with open arms.

“Like I said, it was never given that I would play at international level. I had to put in the hard work; I had to put in week-by-week performances. Some people won’t be happy with me pulling on an Irish jersey, but I obviously felt like playing for this country, putting in the hard work, anything can happen. So yeah, I got all I could ask for.”

“That’s how they think and how they approach it. I highly respect them for that and I’ve got nothing towards them. All I’ve got to do is just make sure I put in a performance and do what I can do, and that’s just to perform on the field, and that’s all I can ask for.

It’s also worth noting that no less than CJ Stander with Munster and unlike other Irish-born and qualified players, Aki has remained loyal to Connacht in rejecting much more lucrative offers from abroad, notably in the Top 14.

“Connacht have supported me from day one when I first arrived and Galway, everyone knows how friendly they are and how they are such good people. Look, I call it my home at the moment and I’m sure people will feel like I’m one of them as well.”

Having grown up in the Auckland suburb of Otahuhu, one of seven children to Samoan parents, Aki assuredly grew up dreaming of playing for the All Blacks rather than Ireland, but so be it. In any event, playing in a World Cup is the pinnacle for him, as it is for any other player.

“It is. As a kid you dream of being at these world stages and I haven’t really thought of it or let it sink in at the moment, I’ve just gone about my work and gone about how I need to be well prepared, making sure the team is prepared and trying to enjoy the moment as the day comes by.

“When you do get the chance or the nod on the head to put on that jersey to represent your country, I’ll see how my emotions feel. It’ll probably be a massive, massive achievement for myself and my family.

“Sure, look, we’ll get to that stage when we get the nod on the head but at the moment I’ve to go about my work and make sure that I’m ready.”

Aki is living in the moment, and in the bubble.

“I haven’t really been out and about at the moment. Mostly I feel like I’m in a hotel as much as it is in Carton House. I know we’re in Japan, but I try as much as I can not to get distracted.

“I try to stay within the group and focus on what I need to do. There is a job that needs to be done and once that’s all done, you’ll sit back and look back at the time and see what happens from there.”

Among the most encouraging aspects of last Saturday week’s 19-10 win over Wales was the strength, fitness and stamina of the Ireland players, none more so than Aki. Looking both leaner and more muscular, while possibly even sharper in his speed off the mark and footwork, Ireland’s dynamic centre seems to be in prime nick.

“I’d like to think so. I’m feeling good going into games, I’m feeling energetic and I feel like I can do things around the park. It is the biggest stage, you have to be in good nick. You can’t be off the ball and that’s exactly what I’m trying to do and hopefully I can keep doing that and improve.”

At 29, it may be his only shot at a World Cup, but in any event, it’s clear that he wants to make an indelible impact on this one.

“Hopefully. That’s the plan,” he says with a smile, but also a clear intent in his eyes. Accordingly, sacrifices have been made over the summer and in pre-season.

“I have shed a few kilos, but that’s just me losing a bit of fat that I’ve had for a few years,” he says, laughing. “I’ve been enjoying the Supermacs a bit too much. Like I said, pre-season has been tough, the weather, the conditioning stuff that Jayo has been doing with Rhys Ruddock’s brother, Ciarán, has been unbelievably good going into this World Cup.

“Look, I’m just happy that I’ve lost [some weight] and have less fat to carry, which is a lot easier to play on the field.”

As to what weight he is now, Aki laughs again when saying: “That’s a secret.” But he’s clearly trimmer than his official weight of 101kg/15st 10lbs.

Aki has been the rock of Ireland’s midfield since making his debut in the win over South Africa in November 2017, starting 20 of Ireland’s last 24 matches, and completing 80 minutes in 16 of them.

He has been there for all the big wins over New Zealand, Australia and South Africa, and was an ever-present in the Grand Slam. He comes into this tournament on the back of playing 80 minutes in three successive games.

Alas, injuries have continually afflicted Robbie Henshaw, Ringrose and Farrell, with Henshaw’s hamstring injury this week occurring with particularly cruel timing, and just after he and Aki had reprised their only Connacht combination so eye-catchingly against Wales.

While Aki admits it was great to see Henshaw back playing again, and they clearly relished reviving their intuitive understanding, the constant, enforced midfield reshuffling has at least meant he has also built up understandings with Ringrose and Farrell.

“The likes of Chris and Ringer playing together, myself and Chris, Ringer and myself, we’ve all played together so there’s nothing wrong with it. Whoever Joe picks on the weekend I’m sure will put in a good performance regardless.”

Asked if the regular reshuffling has been difficult, Aki maintained: “I wouldn’t say difficult. I think it’s been good that I’ve had the chance and had the privilege to build a relationship with all the centres in the camp.

“So I think whoever gets in or gets picked in the game this week with Scotland, we’re all familiar with each other and we’ve all played together, so it’s fine.”

1 Nicholas Quinn: ‘Swimming became how I dealt with grief’
2 A beautiful, happy accident - Moneyball is the best sports movie ever
3 Is it time for the New England Patriots to tear it down and start again?
4 James McClean still failing to learn his own online history lesson
5 Ian McKinley: ‘You do take for granted the simple things in life’
Real news has value SUBSCRIBE